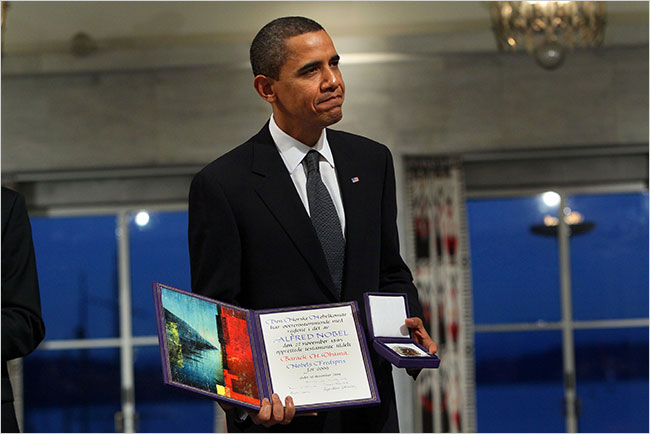 The earliest Christian emperors (including Constantine I himself), as a matter of course, waited until their deathbeds to be baptized. They knew, in a way so many of our Christian leaders have forgotten, that the violence they felt compelled to enact in office was utterly antithetical to Christian teaching. Only when they knew they would do no evil—when they knew they couldn’t possibly do anything else‚ actually—was it safe to wash their sins away in baptismal water.

As he accepts his Nobel Peace Prize in Oslo today, only days after announcing his decision to commit tens of thousands more American troops to Afghanistan (not to mention contractors and drones), President Barack Obama sounds like he wishes he could do as the emperors did. Receiving a prize for peace is something he’d like, perhaps—just not yet, while there’s still dirty work to be done.

I am at the beginning, and not the end, of my labors on the world stage. … But perhaps the most profound issue surrounding my receipt of this prize is the fact that I am the Commander-in-Chief of the military of a nation in the midst of two wars. … I’m responsible for the deployment of thousands of young Americans to battle in a distant land. Some will kill, and some will be killed. And so I come here with an acute sense of the costs of armed conflict — filled with difficult questions about the relationship between war and peace, and our effort to replace one with the other.

Nevertheless, he took the opportunity to insist on the inevitability and necessity of making war in today’s world. He begins by justifying the ever-familiar disjuncture in American politics: celebrating the nonviolent legacy of civil rights while retaining the right to exercise catastrophic violence abroad:

We must begin by acknowledging the hard truth: We will not eradicate violent conflict in our lifetimes. There will be times when nations — acting individually or in concert — will find the use of force not only necessary but morally justified.

I make this statement mindful of what Martin Luther King Jr. said in this same ceremony years ago: “Violence never brings permanent peace. It solves no social problem: it merely creates new and more complicated ones.” As someone who stands here as a direct consequence of Dr. King’s life work, I am living testimony to the moral force of non-violence. I know there’s nothing weak — nothing passive — nothing naïve — in the creed and lives of Gandhi and King.

But as a head of state sworn to protect and defend my nation, I cannot be guided by their examples alone. I face the world as it is, and cannot stand idle in the face of threats to the American people. For make no mistake: Evil does exist in the world. A non-violent movement could not have halted Hitler’s armies. Negotiations cannot convince al Qaeda’s leaders to lay down their arms. To say that force may sometimes be necessary is not a call to cynicism — it is a recognition of history; the imperfections of man and the limits of reason.

Once again, it is breathtaking to hear a politician declare that violence is the best answer to the threat of al Qaeda after it has been failing for seven profoundly costly years. Or that the deadliest conflict the world had ever seen was the best possible response to the crisis in Europe of the 1930s and 40s. We say no; we say better ways are possible (see, for instance, Bryan’s recent essay on WWII). They’re simply not tried with the appalling tenacity, commitment, and perseverance that we seem so eager to devote to war-making.

As the Nobel Committee itself said, the prize came to Obama as a challenge, a “call to action.” So far, he has failed to live up to it. He has failed, in turn, to challenge the world order to live up to higher ideals, to renounce violence and imperial habits. He knows that his practice falls far short of even his ideals. But why should a president be expected to do differently than Rome’s emperors?

I think it’s time, finally, that one should.

Building our muscles for conflict

Obama wants peace, but not yet