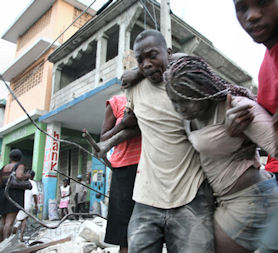 As the crisis in Haiti unfolds, news reports first anticipated and then confirmed the anxiety of many on the ground: that a hamstrung or decimated police force would lead to violence and looting. There are numerous reports of looters wielding knifes, machetes and guns and mobs killing suspected looters as the rag tag police force tries to reestablish order.

These might be uncomfortable facts for those of us who believe in nonviolence. Pessimists and so-called realists find a ready-made narrative for such events in Thomas Hobbes’s description of the state of war. For them, what is happening in Haiti is the enduring natural fact that without fear of government people will take the opportunity to exploit and destroy one another. Only the threat of violence by a functioning police force keeps the worst impulses of human beings in check.

And even if you’re not a Hobbesian, there’s room for despair and cynicism. David Brooks took the opportunity to isolate the backwardness of Haitian culture (the first to end slavery in the Western Hemisphere), as the reason their infrastructure was so vulnerable to earthquakes. Pat Robertson decided it was a good time to chastise Haitians for throwing off the French. Even American assistance, given our history of pernicious meddling in the country and our conspicuous prioritizing of American lives above the lives of Haitians might seem self-serving.

Yet the vast majority of people in Haiti responded to the earthquake with the apparently just as natural of an impulse to help one another. People immediately began to risk their own lives to rescue people trapped under rubble. Previously intractable religious differences instantly melted away. In a remarkable spontaneous protest, Haitians in Port-au-Prince piled up bodies as roadblocks in a macabre protest of the delay in aid. Under the headline “Looting Flares Where Authority Breaks Down” the New York Times reported that “given the conditions, it was all the more remarkable that a spirit of cooperation and fortitude prevailed nearly everywhere else, as people joined together to carry corpses, erect shelters and share what food they could find.”

Just as remarkably, a small portion of the United States military – the same institution that so brutally occupied Haiti for two decades in the early part of the last century – has been temporarily repurposed to deliver aid that will undoubtedly save many thousands of lives. Ordinary Americans and people all over the world immediately responded with millions in donations.

In response to the argument that human history is rife with violence, Gandhi remarked that the force of nonviolence is so common that every instance of it cannot be remarked upon. Yet “thousands, depend for their existence on a very active working of this force.” No doubt this force is the dominant one in Haiti at the moment as it sustains the vast majority of those who have survived – and will save many more lives in the coming days.

To donate to Partners In Health, which has been working on the ground in Haiti for over 20 years, click here.

What will it take to stop alt-right efforts to ‘unite the right?’