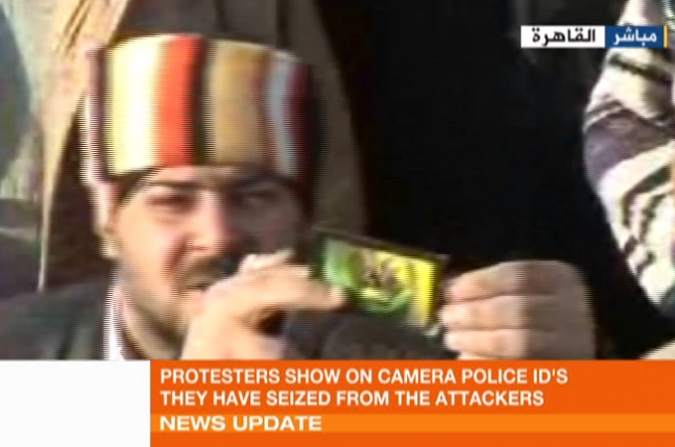 “Power is never the property of an individual; it belongs to a group and remains in existence only so long as the group keeps together. … Violence appears where power is in jeopardy, but left to its own course it ends in power’s disappearance.” — Hannah Arendt

Hosni Mubarak has just used the last tool in his tool box in a desperate attempt to cling to power. First, like all dictators, he attempted to use the security forces most loyal to him – the special police and security forces – to intimidate and disperse the protestors. Through tear gas, rubber bullets and live ammunition, the protestors stayed. Next, Mubarak sent out the Army. The protestors had prepared for this and embraced the army with a “hug a soldier” strategy that eventually won a pledge from the army to not stop the protests.

When the use of formal violence did not work, Mubarak tried carrots. He appointed a new government and vice president and promised not to run in the next elections, but the former only affirmed that he was capable of doing whatever he wanted to do and the latter would allow him to set the terms of that election and potentially retain power informally through the NDP. So the protestors stayed and the world watched and waited for Mubarak to crack.

Now we get the last gasp of desperate regimes: the use of thugs and violence outside of the formal levers of power to sow chaos. The key here is that the power that the nonviolent activists have exercised in recent days cleared away the fear that had characterized Egyptian society for three decades. Without such fear, the corruption and violence of authoritarian governments can no longer function. But Mubarak has calculated that if he cannot retain power based on the fear the Egyptian people once felt toward him, he will at least take away the power the protestors have created by making them scared of their fellow citizens. Indeed, employing his baltageya is a tactic with which Egyptians are all too familiar.

Unfortunately, this final strategy of Mubarak has met with some success, or at least the sort of perverse “success” that dictators like Mubarak rely upon. This is partly due to an unfortunate inability of some reporters to distinguish the players here (Facilitated by the fact that the press was directly targeted by the thugs as well, forcing many reporters to flee). Headlines such as “Protests Turn Violent” and “Violence in Cairo” portray the events in a way that the casual observer might think that all sides are instigating violence, or that the protestors became so frustrated that they gave up nonviolent means. Instead, even in the face of violence today there were reports of the anti-government protestors maintaining discipline and chanting “peacefully, peacefully.” But they also broke on occasion, despite a valiant effort ot maintain nonviolence, either defending themselves from the thugs who descended on Tahrir or, in some cases, attacking those who had attacked them. This was a major victory for Mubarak, especially in his attempt to hang on to the military.

Past nonviolent movements would suggest that there are two crucial things for the anti-government protestors to keep in mind. First, the organizers must find a way to creatively channel the anger and fear that their fellow protestors felt in the assault today. Doing so may be difficult and it may require new and innovative strategies. Even at this late stage this is not impossible, because NBC and other outlets are reporting that amidst the chaos of the last day the organizers are still finding ways to effectively communicate with people in the city and the Square.

Second, they must be sympathetic to the military and work hard to communicate with them. The ordinary soldiers in Tahrir Square are under extraordinary psychological pressure being caught between their duty to the people of Egypt, orders they are receiving from commanders and pro-Mubarak thugs. Although the organizers have pledged to continue protests until Mubarak falls, from a strategic standpoint and a practical standpoint they simply cannot lose the support of the military that they worked so hard to win. Both Gandhi and Dr. King were very keen to stop protesting and have cool down periods. In Dr. King’s case, this was sometimes with the explicit purpose of not forcing the National Guard to have to act, but instead avoiding bloodshed by delaying a protest until another day.

It may or may not be time for this in this case, but what is certain is that in order to maintain control of the narrative, the protestors now need to show that they can let the regime overplay its hand without being drawn into the vortex of violence that is its only hope for survival.

Could the left withstand a coup attempt if it ever won the presidency?