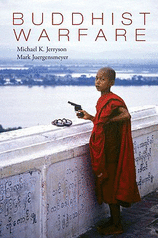 Buddhism is often thought of as the exception. It’s a religion without gods (at least in some forms), to the chagrin of those who want to define religion as something along the lines of “belief in gods.” By the same token, as Christianity, Islam, Judaism, and Hinduism take the blame for some of history’s most savage violence, we tend to think of Buddhism as the sole nonviolent world religion.

A new book by Mark Juergensmeyer and Michael Jerryson (both of UC Santa Barbara’s religious studies department), Buddhist Warfare, reveals a Buddhism that is more complex than that and, the authors claim, more human. Jerryson writes, over at Religion Dispatches today:

Before his fieldwork between 2006 and 2008 in Thailand, Jerryson thought of Buddhism as basically peaceful too. He actually went there to study Buddhist peacemaking. But what he found were militarized monks carrying guns and stockpiling weapons. It caused him to question the sources of his knowledge about the religion back home:

It was then that I realized that I was a consumer of a very successful form of propaganda. Since the early 1900s, Buddhist monastic intellectuals such as Walpola Rahula, D. T. Suzuki and Tenzin Gyatso, the Fourteenth Dalai Lama, have labored to raise Western awareness of their cultures and traditions. In doing so, they presented specific aspects of their Buddhist traditions while leaving out others. These Buddhist monks were not alone in this portrayal of Buddhism. As Donald S. Lopez Jr. and others have poignantly shown, academics quickly followed suit, so that by the 1960s U.S popular culture no longer depicted Buddhist traditions as primitive, but as mystical.

Yet these mystical depictions did not remove the two-dimensional nature of Western understanding. And while it contributed to the history of Buddhism, this presentation of an otherworldly Buddhism ultimately robbed Buddhists of their humanity.

Buddhist violence is certainly not limited to Jerryson’s experiences of it. For decades, Sri Lankan Buddhists have been carrying on a brutal civil war against a Tamil insurgency. For thousands of years, Buddhists have led and fought in armies, just as adherents of other religions have.

Does, Jerryson’s phrasing forces me to ask, violence equal humanity? Do we only know that our image of someone is human if it includes the specter of cruelty? I suspect that there is some truth to this. Just as Augustine of Hippo believed that faith begins with the recognition of one’s own sinfulness, Gandhi’s form of nonviolence was built on an intensive awareness of the temptation to violence within oneself. The power of his example suggests that even radical nonviolence depends on the recognition that violence is integral to human nature.

In the hands of Jerryson and Juergensmeyer, this book is not meant to be a glorification of violence, or an excuse for it. (Earlier in his career, it should be noted, Juergensmeyer wrote a fine little book called Gandhi’s Way: A Handbook of Conflict Resolution, and he has since written important works on religious violence around the world.) Instead, they insist that we focus on Buddhist violence partly in order to fully appreciate the challenge of the alternative. Buddhist Warfare is likely to hit home most of all among American-born Buddhists, who have enjoyed the selective vision of a religion in which violence seems happily absent.

Why now is the time to connect the pipeline fights

Daniel Berrigan and his fearless nonviolence, at 100

A new campaign for land rights is working to end the decades-old practice in El Salvador that has denied more than 350,000 families title to their property.