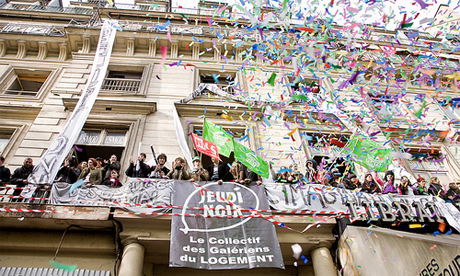 In a recent Guardian op-ed, Jessica Reed wrote about Jeudi Noir, a group of Parisian housing activists, who—for the past two-and-a-half months—have been squatting in a piece of real estate fit for a king, literally. Place des Vosges, located in the chic neighborhood of Le Marais, is the oldest square in Paris. Originally named Place Royale, this beautifully-manicured square was built by Henri IV to celebrate the wedding of his son Louis XIII. Jeudi Noir has taken over 1 Place des Vosges, which has been vacant for over 40 years. Their goal is to bring attention to the housing crisis as well as bring light to the fact that one out of 10 buildings in Paris are vacant, many of which could be used for low-income housing, student housing, or for the number of homeless Parisians who have recently started building tent villages along the Seine.

Jeudi Noir has gained attention through their surprisingly-festive actions. After clicking around their website I found several videos of the activists, along with a guy dressed up as some sort of Disco Stu, showing up at marches, real estate agencies, and apartments for rent and throwing impromptu parties. Maybe this fun, creative protest is what has gained them support from not only the public, but also from members of France’s Green and Socialist parties (both of which may sound like small-potatoes movements here in the U.S, but are veritable political parties in France.)

Perhaps this is the sort of action we should be taking at home. New Yorkers, like myself, could put Jeudi Noir’s suggested party kit to good use. In 2006 Picture the Homeless conducted a survey of vacant property in Manhattan and found that there are 24,000 potential apartments in vacant buildings and lots in Manhattan alone. (Keep in mind, that that number does not include all five boroughs.) Picture the Homeless believes that the vacant property that they’ve assessed could house the city’s entire homeless population, which according to Friday’s Department of Homeless Services Daily Report is at roughly 37,487 people.

Jeudi Noir’s mission statement rightfully points out that the right to housing does not coincide with the right to property. What kind of right do landlords with vacant properties have to keep people in need of shelter locked out? Or banks to kick families out of their homes? As Reed eloquently points out in her piece:

It might be hard to immediately sympathise with squatters—the right to own property runs so deep in modern western society that anything challenging the status quo is bound to make waves. I would, however, question the intentions and principles of those willing to let their own buildings decay uninhabited for 40 years while homeless people die every winter from exposure. How to rationalise that? I struggle to find any excuse for leaving the most impoverished section of the population out in the cold, when buildings go unused and unlet for very long periods of time.