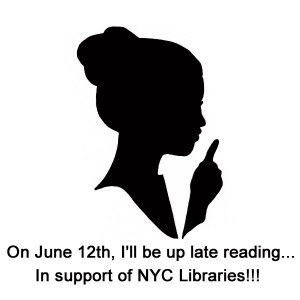 Librarians and bibliophiles alike held a 24-hour read-in marathon on the steps of the Brooklyn Public Library at Grand Army Plaza this past weekend. The action brought 200 volunteer readers together to help raise awareness to the proposed $37 million budget cut to New York’s public libraries, which would result in the closing of at least 10 branches, a reduction in hours of operation (libraries would be open only 4 days a week as opposed to the average of 6 or 7), as well as lay offs of over 700 librarians.

The read-in featured everything from Emma Goldman to James Baldwin, Gossip Girl and Albert Camus, serving as a great testimony of the wide range of library patrons these cuts will affect. As the New York Times reported:

“In the Great Depression, the New York public libraries were kept open seven days a week,” said Aliqae Geraci, a librarian in Queens and a coordinator of the event. “It is a huge support system for the unemployed and the transient”

The organizers are hoping the City Council will restore financing to avoid the cuts, which they say will particularly hurt the city’s less fortunate, who depend on libraries for Internet access and employment help.

Another large group these measures will affect is children and parents. Libraries offer numerous free programs for literacy, homework help, and after-school activities. Along with school budget cuts which will result in the closure of several schools and teacher layoffs, kids will surely suffer terrible consequences from these actions.

Thanks to websites like Don’t Close the Book on Libraries and Save NYC Libraries, as well as entertaining actions like the Ghostbusters reenactment that Improv Everywhere staged, NYPL has raised over $120,000 in addition to receiving over 100,000 letters of support. But there’s still more work to be done! If you want to help, today (June 17, 2010) is Call In Action Day. If you’re in the New York City area, call 311 (outside New York call (212) 639-9675) and tell them why you think we should continue to fund our libraries.

The revolution will not be standardized