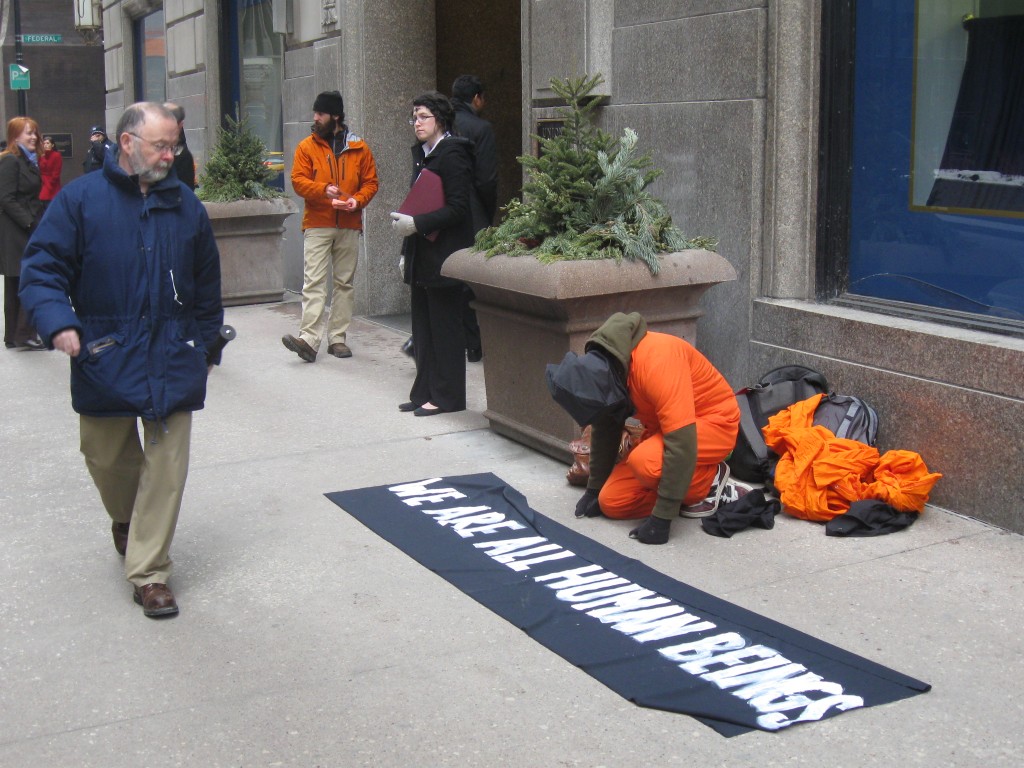 On the first day of Lent last week, I started my day with mass. I sat with my fellow students. I sat with Jesuits and sisters. I sat and waited to receive ashes. I waited and listened, searching for the meaning of the day. Hoping the priest would remind me why I was there; remind me what Ash Wednesday represented. If only after two decades of attending Ash Wednesday services I could be more grounded in the meaning behind the tradition.

But in my mind and in my heart, I was carrying my agenda for the day. I would not be returning to class after mass. I would be catching the el to head south. I would be a part of the dialogue at the Union League Club. I would be part of the presence outside of its doors. I would be sitting at a table and fasting through lunch. I would wait, and listen actively in order to assess the words of Brigadier General Thomas L. Hemingway as he gave his lecture, “Closing Guantánamo: Policy, Legal and National Security Concerns”.

As we traveled south, we read the cases of men imprisoned at Guantánamo. We read their names, their trials and the details of their continued detention.

When we reached the Union League Club, we opened our banners and we put on orange jumpsuits. We pulled hoods over our heads and processed to the front entrance.

There we stood. Masked. Solemn. Strong.

Our message read, “We are all human beings. End indefinite detention.”

Underneath the hood, I felt people stare at me. I felt their curiosity. I felt their indifference. I began to think of the men I represented. I began to imagine them standing in my place, on the streets of Chicago, as people walked by and nodded, as people walked by and gawked. I wondered at the shame one feels as a prisoner, made to wear a hood, made to wear a costume, made to feel inhuman. I wondered at the powerlessness of standing erect in the face of indifference, imprisoned.

As I sat inside the luncheon, I was impressed by the respectability of the lecture. I did not agree with all that was stated, but I could understand it. However, as the room was opened to questions. It became less respectable and more defensive, more ugly. Challenging questions were asked about the humanity of the men at Guantánamo, the detainees cleared for release and the facts surrounding recidivism.

Yet, these questions were met with policy answers. Constructive dialogue was lost. It became a game of terms, a duel of details, instead of communication about the issues.

Sitting at my table at the luncheon, I recalled a conversation our Kairos community had shared in preparation for this day. Following the example of Witness Against Torture actions, we took time to consider what the men in Guantánamo would want us to do in our action. We took time to reflect on what it means to represent them at a luncheon such as this one.

This reflection invited a prisoner from Guantánamo into the room with me. It sat him down next to me, facing me, watching and waiting for how I would react, waiting for how I would represent him in this room. Looking at me, he waited for little, expected more. He witnessed a disapproving look, a disgruntled nod. He witnessed finger tapping and note taking, but no voice came from me to represent him and his suffering.

Unsure of how to react to the discussion being had, unsure of how to register disapproval, I sat still. Unsure of how to take a stand and yet maintain common ground with the men at my table, and the professors and students surrounding me, I sat and thought hard about my inaction. How would they react if I walked out? If I shouted?

I can sit and criticize my inaction in retrospect, as if I have gained courage to empower me in action the next time, but have I found that courage yet?

During morning mass I had realized this Ash Wednesday was different. It held new meaning for me. When I walked up to receive my ashes and looked in the priest’s eyes, he stared back and said, “Turn from sin and live according to the Gospels”. This was the meaning of the day; this was what I had been waiting to hear. It was a challenge, from him to me, from the men at Guantánamo to my conscience.

Active love, thankfully, exists in community. As we returned to campus, I recalled the last (and only) other time that I had found myself in an orange jumpsuit. That time was one year ago at a campus demonstration that Kairos Chicago held outside of Loyola’s student union. Last Ash Wednesday I had stood in an orange jumpsuit in front of my peers. This year I found myself standing in front of a new crowd, with the same loving community. My ability to hope, to learn, to be challenged and to challenge others stems from that community. Still weak and unsure, Lent begins this year in community, filled with the opportunity to actively love more, and more again.

Annemarie Barrett is a student at Loyola University Chicago. She is a member of the Loyola Anti-War Network and the Kairos Chicago community. She can be contacted at abarrett1[at]luc.edu.

What if the LGBTQ movement fought for prison abolition rather than same-sex marriage?

The beauty of COP21 is in the street

With Trump endorsement, Paul Ryan risks gaining the world, but losing his soul

Acting locally and globally at the People’s Climate March

“Turn from sin and live according to the Gospels”