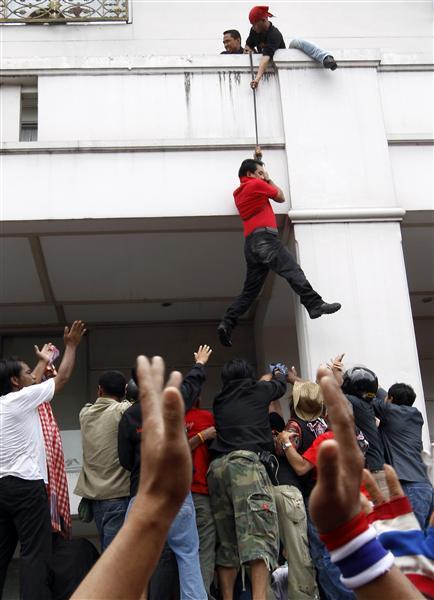 The political crisis in Thailand is spiraling into greater turmoil. Days after I wrote about the potential blowback from the anti-government Red Shirts resorting to violent tactics, the military retaliated, killing at least 24 protesters in the worst violence Thailand has seen in nearly two decades. Then, last week, the government attempted another crackdown on the protests by converging on a hotel where protest leaders were holed-up. But this time they failed, rather spectacularly in fact. According the The Guardian:

Less than 30 minutes before the hotel drama, the deputy prime minister, Suthep Thaugsuban, announced on national television that a unit of special forces had encircled the SC Park hotel in Bangkok where Arisman and other red shirt leaders were staying.

With a rope looped around his waist, Arisman slid down from a third-storey ledge of the hotel into a waiting crowd of cheering supporters who led him to a car.

Arisman, a pop singer turned activist, then returned and clambered on top of a van to give a speech and announce that the red shirts, who support the former prime minister Thaksin Shinawatra, had taken two policemen hostage.

“I would like to thank all of the people who saved me ‑ you have helped save democracy,” said Arisman, a one-time crooner of love songs and a Thai heartthrob.

Police had surrounded the hotel and blocked its entrances, but were outnumbered by red shirts who stormed the building without resistance to help Arisman escape.

As amusing as this scene may sound, it is likely to only perpetuate more violence. Although the Red Shirts number in the tens of thousands and have at times overwhelmed the military, there are still more factors stacked against them. For one, the Yellow Shirts, or Peoples’ Alliance for Democracy (PAD), are beginning to stir after remaining quiet the past few months. According to BBC News:

The yellow-shirts, who say they are defending the monarchy, held a meeting of some 3,000 supporters in Bangkok on Sunday.

PAD leader Chamlong Srimuang said: “We give the government seven days to return peace to the country or we, every member of the PAD, will perform our duty under the constitution.

“Prepare yourselves for the biggest rally when we will eat and sleep on the street again.”

Yellow-shirt spokesman Parnthep Pourpongpan added: “In seven days we hope that the government will deal with the terrorists from Thaksin immediately, otherwise we will show our voice to protect the country and the royal family.”

Or, as Reuters pointed out, there is another potentially violent scenario:

The seemingly intractable five-year crisis has fueled speculation that, with the government and security forces in disarray and concerns about clashes between rival demonstrators, hardliners within the military may decide to stage a coup to end the impasse, which analysts say would likely backfire.

It’s hard to know if none of this would have happened had the Red Shirts not burst into the Parliament compound, but the escalation of violence is undeniable and doesn’t seem to favor any one particular group. The Red Shirts had quieted the government and the Yellow Shirts when they was using nonviolence. To revert back to nonviolent resistance now could  shift the power dynamic back in their favor, as it removes the justification of retaliatory violence.

Unfortunately, the Red Shirts do not seem to be considering this strategy, making this week potentially more deadly than the last and a further step away from the objective of restoring democracy.