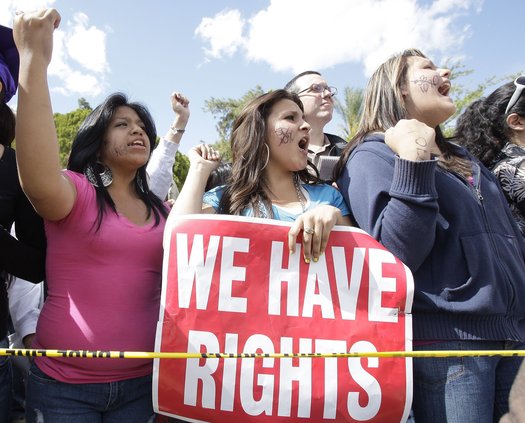 According to an op-ed by Eugene Robinson of the Washington Post, the “Support Our Law Enforcement and Safe Neighborhoods Act”:

…requires police to question anyone they “reasonably suspect” of being an undocumented immigrant — a mandate for racial profiling on a massive scale. Legal immigrants will be required to carry papers proving that they have a right to be in the United States. Those without documentation can be charged with the crime of trespassing and jailed for up to six months.

It honestly reminds me of the law Gandhi resisted in South Africa, which required people of color to carry identification which could be checked at any time.

During an interview on Democracy Now! today, Arizona Rep. Raul Grijalva said that the there is also a part of the law that would “require school teachers to become immigration officers and keep a list of potentially undocumented kids… which is another clear violation of federal protection.”

In response Grijalva – along with other Democrats, religious leaders and activists – has called for an economic boycott of the state aimed specifically at getting organizations that are planning on coming to Arizona for conferences or conventions to back out. At least one group, the American Immigration Lawyers Association, has already responded by moving their convention planned for this fall to another state.

In his weekly sports column, Dave Zirin has proposed extending the boycott to the Arizona Diamondbacks, because its executives are a major funder of the state Republican Party, which pushed this immigration bill.  I personally don’t see why the boycott should be limited only to baseball.

According to Dennis Herrera, a city attorney from San Francisco, who has urged the city to cancel any contracts it might have with Arizona:

…a similar boycott 20 years ago, which included the National Football League’s decision to move the Super Bowl from the state, led to Arizona finally dropping its refusal to recognise to Martin Luther King Day.

Obviously, immigration is a far more pressing issue than recognizing a holiday, so getting the state to reverse course will take far more pressure from the public than was needed during that campaign. Thankfully, Grijalva’s call for economic sanctions is being complemented by many other types of action. On top of demonstrations in many communities around the country – from cities in Texas and Florida to Minnesota and Maine – The Guardian has reported that:

Scores of lorry drivers were reported in the US media to have threatened to stop carrying loads to and from the state.

The Rev Al Sharpton, an advocate of African-American rights, said in New York yesterday he would organise “freedom walkers”, just as the civil rights movement had organised freedom riders to board segregated buses in the 1960s. “We will go to Arizona when this bill goes into effect and walk the streets with people who refuse to give identification and force arrest,” Sharpton said.

Finally, while some on the right are challenging the idea that the Tea Party movement is racist, Eugene Robinson makes an interesting point about their conspicuous absence at rallies denouncing this law over the weekend:

Isn’t the whole premise of the Tea Party movement that overreaching government poses a grave threat to individual freedom? It seems to me that a law allowing individuals to be detained and interrogated on a whim — and requiring legal residents to carry identification documents, as in a police state — would send the Tea Partyers into apoplexy. Or is there some kind of exception if the people whose freedoms are being taken away happen to have brown skin and might speak Spanish?

As this debate heats up, it’ll be interesting to see how much pressure can be mobilized against the state to reconsider this law, which Robinson says is more like “an act of vengeance.”

Imagine if everyday were 9/11. For one community in the US, it is.