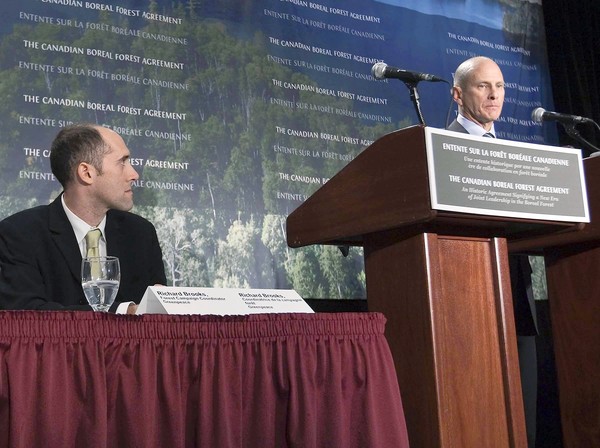 nies in exchange for a commitment to suspend logging and road building immediately on nearly two-thirds of Canada’s forests, stretching from British Columbia to Newfoundland. According to The Guardian:

The immediate gains include an end to highly destructive logging in the last remaining expanses of intact forests, protection for the remaining woodland caribou, whose population has shrunk to 36,000, and preservation of an important resource in fighting climate change. Scientists believe that the soil and trees in Canada’s coniferous forests store up to 20bn tonnes of carbon.

Unfortunately, we can’t expect that logging companies are doing this out of the kindness of their hearts. So what’s the rub? According to Avrim Lazar, president of the Forest Products Association of Canada, which represents the companies:

“We know that tomorrow’s markets are going to be judging forestry products on their environmental credentials. Having the environmentalist community on our side means that we are getting a huge branding advantage.”

Such bluntly opportunistic wording reminds me of how the World Wildlife Foundation came to the aid of IKEA when it was facing bad PR, as detailed in a recent great story by The Nation about the corruption of major conservation groups:

When it was revealed that many of IKEA’s dining room sets were made from trees ripped from endangered forests, the World Wildlife Fund leapt to the company’s defense, saying–wrongly–that IKEA “can never guarantee” this won’t happen. Is it a coincidence that WWF is a “marketing partner” with IKEA, and takes cash from the company?

If we are to learn from this story, we must buffer our excitement over the news of this environmental victory with a commitment to make sure it isn’t later corrupted by corporate power.

Resisting the extremism of the Dhaka attack with radical love

Did enviro groups just make a deal with the devil?