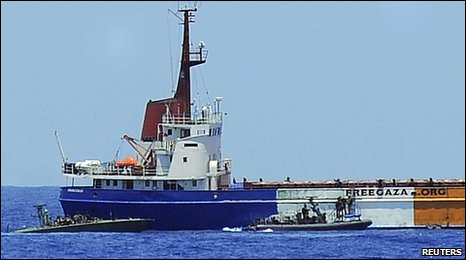 Just days after the violent takeover of the Freedom Flotilla, another Free Gaza boat, the MV Rachel Corrie, has been captured by the Israeli military in international waters. This time, there appears to have been no fighting. Says a Free Gaza Cyprus press release:

Just before 9am GMT this morning, the Israeli military forcibly siezed the Irish-owned humanitarian relief ship, the MV Rachel Corrie, from delivering over 1000 tons of medical and construction supplies to besieged Gaza. For the second time in less then a week, Israeli naval commandos stormed an unarmed aid ship, brutally taking its passengers hostage and towing the ship toward Ashdod port in Southern Israel.  It is not yet known whether any of the Rachel Corrie’s passengers were killed or injured during the attack, but they are believed to be unharmed.

The Corrie carried 11 passengers and 9 crew from 5 different countires, mostly Ireland and Malaysia. The passengers included Nobel Peace Prize laureate Mairead Maguire, Parit Member of the Malaysian Parliament Mohd Nizar Zakaria, and former UN Assistant Secretary General, Denis Halliday.  Nine international human rights workers were killed on Monday when Israeli commandos violently stormed the Turkish aid ship, Mavi Marmara and five other unarmed boats taking supplies to Gaza. Prior to being taken hostage by Israeli forces, Derek Graham, an Irish coordinator with the Free Gaza Movement, stated that: “Despite what happened on the Mavi Marmara earlier this week, we are not afraid.

One thing that strikes me about both this incident and that of the Freedom Flotilla is the evidence of direct involvement by certain governments. The press release continues to explain that, in addition to the individual officials who happened to be aboard, the Malaysian government itself was involved in helping the activists obtain the boat:

The 1200-ton cargo ship was purchased through a special fund set up by former Malaysian Prime Minister and Perdana Global Peace Organisation (PGPO) chairman Tun Dr. Mahathir Mohamad. The ship was named after an American human rights worker, killed in 2003 when she was crushed by an Israeli military bulldozer in the Gaza Strip. Its cargo included hundreds of tons of medical equipment and cement, as well as paper from the people of Norway, donated to UN-run schools in Gaza.

Something similar was the case with the Freedom Flotilla. The now-infamous Mavi Marmara, on which the fighting took place earlier this week, appears to have been obtained with the help of Turkish politicians. Reports The New York Times:

The group bought three boats, including the Mavi Marmara, the one that was raided, from a company owned by the Istanbul city government for $1.8 million. The boats carried aid that included building materials — cement, tiles and steel, which Israel bans because it says they could be put to military means — worth about $10 million, members said.

The Turkish government’s sympathy with the operation was immediately clear when Prime Minister Recep Tayyip Erdogan cut short a trip abroad and returned home immediately upon hearing about the disaster.

What should arouse some concern here, in the willingness of governments to aid these activists, is the extent to which their work might be co-opted by the interests of those governments, and to which they might, willingly or unwillingly, be acting as agents in diplomatic games. To the extent that this is the case, the Free Gaza activists become more than fighters for justice; they become political pawns.

Nonviolence means honesty as much as it means laying down arms; it’s no mistake that Gandhi called his strategy “truth-force.” If governments intend to become involved in the struggle against the Gaza blockade, they should do so openly and transparently, not by hiding behind the efforts of activists (the notorious Bay of Pigs invasion of Cuba comes to mind). They should make their intentions and involvement clear. And if activists find that they have any reason to be wary of such governments’ involvement, they should take greater pains to distance themselves from it.

Can the movement for free, quality public education win in Chile?

Are the Free Gaza activists being co-opted by governments?