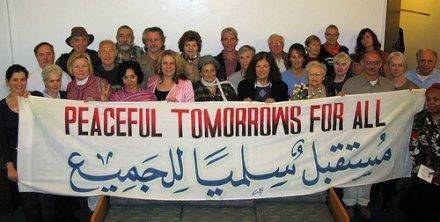 After September 11, 2001 our government played a dominant role in justifying retaliation. It exploited the tragedy of that day to further rationalize its political and military agendas. With the attacks still fresh in people’s minds, grief-stricken Americans turned toward fear driven interminable violence, thinking that would protect them. While many Americans still cling to this delusion, a group called Peaceful Tomorrows, is proving that not all surviving victims of 9/11 think vengeanace is the answer.

Peaceful Tomorrows, derived from the Martin Luther King statement “Wars are poor chisels for carving out peaceful tomorrows,” has 220 9/11 family members in the United States, including others in seven foreign countries. Their first gatherings were in response to the bombings of Afghanistan, when they began to notice their loved ones’ deaths were being used to stoke nationalism, support wars and normalize abusive behavior. They insisted that our government needed to act in accordance with the US and international law while promoting foreign-policies that seek peaceful alternatives. They have 7 main goals and say that:

“By developing and advocating nonviolent options and actions in the pursuit of justice, we hope to break the cycles of violence engendered by war and terrorism. Acknowledging our common experience with all people affected by violence throughout the world, we work to create a safer and more peaceful world for everyone”

In 2002, Peaceful Tomorrows attended a United Nations headquarters conference against the bombings of Afghanistan. Their responses increased with the Iraq war, Patriot Act, warrant-less wiretapping under the Foreign Intelligence Surveillance Act, Abu Ghraib, Guantanamo Bay, the renditions to CIA “black sites” and many other injustices. They have organized with other antiwar groups like Voices for Creative Nonviolence and LaOnf (an Iraqi Nonviolence Group which means “No Violence” in Arabic).

This form of restorative nonviolence has taken those in Peaceful Tomorrows and many others past the false division of an us-verses-them type world propagated by the US government. Many of the members continue to visit and participate with others in Iraq and Afghanistan who have suffered under the US occupations. Early on, before the media even took notice, Peaceful Tomorrows’ testimonies gave a face and voice for the countless number of innocent civilians that were watching their family and friends being wiped out in US bombing campaigns and other military actions.

They’ve shown that Afghan and Iraqi civilians are not our enemies but our friends, having much in common with us. It is one of many steps they’ve taken to try and repair the damage our country has caused. But they cannot do it alone. We must all share the responsibility of the destruction and violence our government and military has inflicted on others.