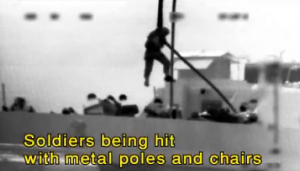 The recent attack on the Mavi Marmara has inspired discussions of the techniques of nonviolence in the mainstream media. Here at Waging Nonviolence, we have already lamented what appears to have been a lack of discipline on the part of the protesters. However, an interesting commentary by Lane Wallace in The Atlantic shows how misunderstandings about the basic principles of nonviolence play a role in skewing coverage of and opinion about the events.

Information is still murky, but what Wallace gets right in her piece is that Gandhi was insistent that one should always defend oneself with nonviolence, not physical force, if one is able. When the Israeli military raided the ship, they hoped to send the message that the blockade of Gaza would remain firm. In the aftermath, Israel has claimed the activists had terrorist connections.

By breaking from strict nonviolent discipline, the activists played into this narrative, giving it a measure of plausibility and shifting the field of interpretation. Wallace says, expressing the sentiments of many:

[T]here is at best a naivete, and at worst a disingenuousness, in provoking a fight and then complaining noisily that a fight broke out. The activists decided to take on the Israeli military. It doesn’t matter whether the military should have resisted their passage to Gaza, in a moral sense; the fact remains that Israelis had been very clear that they were going to take whatever measures were necessary to stop the boats. So the activists knew they were going to meet resistance. […] There are no lack of individuals, groups, or nations who use violence as a means to an end. But if you decide to step in that world, you can’t complain when your opponent uses violence in return.

Wallace is sympathetic to nonviolent activism and her piece is an indication of the extent to which the Free Gaza movement has lost control over the interpretation of the events. Even while inspiring worldwide condemnation of the unjust Gaza blockade, what has most disturbed me is the character of much of the outrage it has inspired. The Turkish president’s assertion that Turkey will “never forgive” the killing of the ten protesters, protests in Ankara featuring hardliners burning Israeli flags and offering chants of “death to Israel.” This in turn has predictably inspired protests by Israeli hardliners equating Turkey and Hamas and claiming, “We came with paint guns and got lynched.” Israel’s bellicose actions and statements are of course responsible for this, but the activists on the Mavi Marmara bear some responsibility as well.

However, Wallace makes a critical, faulty assumption in her analysis of nonviolence and one that is frequent among those who are casual observers of it. She writes that the problem with the flotilla was that it “went into the confrontation looking for conflict, to draw attention to their cause.” Citing Gandhi and King she says that “[q]uiet, uncomplaining courage is harder and less satisfying than provoking an opponent.” Unlike the Gaza protesters, when “Martin Luther King, John Lewis, the Freedom Riders and the rest of the non-violent protesters for civil rights set out, they knew what they were walking into. And if we admire their courage, it’s because they walked into a hailstorm without so much as a word of complaint.”

Both Dr. King and Gandhi were very keen to use nonviolence to inspire confrontation and they did so in conjunction with some of the most profound words of complaint the world has ever known. Even in particular instances of direct action, “complaining” was important (think of C.T. Vivian confronting Sheriff Jim Clark in Selma). They were also persistently held responsible for being agitators who caused violence. The purpose of nonviolence is to put the violence that is the lifeblood of segregation and colonialism on display and excavate the hatred and fear that drives it. The problem with the flotilla was not in provoking and revealing the character of Israel’s death grip on Gaza. The provocation worked perfectly in demonstrating that only deadly force can support Israel’s current policies. The problem is that by failing to stick to the principles of nonviolence the Free Gaza movement failed to take the opportunity that was given to them.

Nonviolent means usually have a more direct relationship to political outcomes than violent means. When militants fire rockets into Israel for the purpose of protesting the Gaza blockade, the substance of what they are doing is completely divorced from the political outcome. When a flotilla of aid tries to break the embargo, there is consistency between the means and the ends. But attacking commandos—even those trying to stop a flotilla—is not. Maintaining consistency in means and ends can be extremely difficult, but it is why Gandhi thought the methods were more truthful.

Wallace both underestimates how difficult it is to maintain nonviolent discipline in the face of highly trained uses of violence and misunderstands the purpose of nonviolent protests. But her impressions of nonviolence are not uncommon and something those of us who use nonviolent means should keep in mind going forward.

Stephane Hessel — the embodiment of resistance lives on

Gandhi and King on the Mavi Marmara