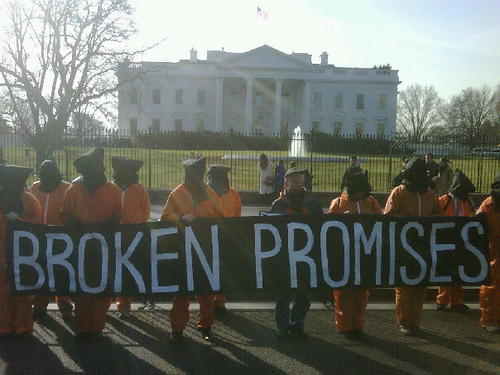 Twenty-four Witness Against Torture activists were acquitted of an Unlawful Assembly charge in D.C. Superior Court on Tuesday, June 16th.   Back in January, while twenty-eight jumpsuit-clad activists occupied the steps of the Capitol building, fourteen others broke off from a tour inside the Rotunda and performed a memorial service for three Guantánamo deaths.

Judge Canan’s courtroom was crammed with pro-se co-defendants, supporters, and legal advisors. Bill Quigley, attorney advisor and Legal Director at the Center for Constitutional Rights, poignantly orated the motion to argue the activists’ defense of international law and necessity.  Drawing on stories of mistreatment and continued detention of over one hundred men in Guantánamo, Quigley argued that no further legal recourse is available to address the injustice of U.S. policies of torture.

While Judge Canan denied the defense request, he acquitted the twenty-four outright by way of a technicality – the government wasn’t able to argue their breaching of the peace.

However, a year and a half after Obama’s issued promise to close the detention facility, 181 men still languish there, every day fading further away from their families and lives on the outside.  Many are facing their eighth year of illegal detention.  Many more, an estimated seven hundred men, are being held by the U.S. at Bagram Air Force Base in Afghanistan.  And now, after the action, the subsequent arrest, thirty-plus hours in a D.C. Central holding cell, and almost five months of trial preparation, I can’t help but wonder what other means we have to hold the Obama Administration accountable for this immoral disaster.

Certainly we can’t stop thinking of creative, controversial strategies to confront the decision-makers.  We can’t give up on efforts to continue to educate.  Human rights groups and solidarity networks throughout the world maintain their organizing to bring awareness to these crimes.  But beyond that, I’m at a loss as to the means necessary to ensure our Muslim brothers and sisters, despite their actions, will not be rendered, tortured, and held indefinitely in my name.

Still, we must revel in our small victories. “With his decision”, said Quigley following the acquittal, “the judge validated the effort of the demonstrators to condemn the ongoing crime of indefinite detention at Guantánamo.”  Surely, this struggle continues.