The Chicago flag is iconic. Four red stars symbolizing key events in the city’s history are surrounded by blue bars for the Chicago River. A riff on the flag was created last year by the campaign that fueled the Reparations Ordinance for Police Torture Survivors — a radical document that outlines a path toward healing for those who survived torture under the direction of former Chicago police commander Jon Burge. The activist logo includes a fifth star, only in outline, to mark the Chicago Police Department’s reign of terror — including beatings and electrocution — against hundreds of black men from 1978-91. Only with official recognition of the torture and with restitution can that final star be made red.

In April 2015, the Chicago City Council passed the Reparations Ordinance, which includes financial relief for the torture survivors. In a public ceremony, Mayor Rahm Emmanuel apologized to them, their families and their communities. The reparations package is a stunning success, showing the power of sustained grassroots organizing to win some measure of justice for those suffering state violence. Organizations including Project NIA, the Chicago Torture Justice Memorials, and the People’s Law Office devoted enormous amounts of energy and time to organize for the ordinance’s victory. But as the recent revelation of the CPD’s cover-up of another police killing makes clear, more work remains.

As a resident of Chicago on the fringes of the reparations campaign, I wore a T-shirt with the activist logo last week in Guantánamo, Cuba. I was there over Thanksgiving with Witness Against Torture, a grassroots group devoted to closing the prison and ending all forms of U.S. torture. Along with 13 others, we traveled to Cuba in part to commemorate the 10-year anniversary of the group’s first pilgrimage — a 70-mile walk from Santiago de Cuba to the detention facility in 2005.

After arriving this time, we set up tents on top of a scenic overlook of the bay. The edge of the U.S. base was visible. We faced the prison and spoke our anger at our government and compassion for the men it has abused. We held huge banners, including portraits of detained men. On Thanksgiving Day, we fasted in recognition of the ongoing hunger strike of some detainees, and the separation of all from their families. And, in the defining ritual of our trip, we read the name, told the story, and placed on a stone wall the picture of each of the 107 men still at the prison. We then placed the portraits (excluding those of the tiny number of admitted, terrorist perpetrators held at Guantánamo) on a bed of blankets, prayer rugs, and mementos to represent homecoming. To accompany this act, we sang the words: “Courage Muslim brothers / you do not walk alone / we will walk with you / and sing your spirit home.” 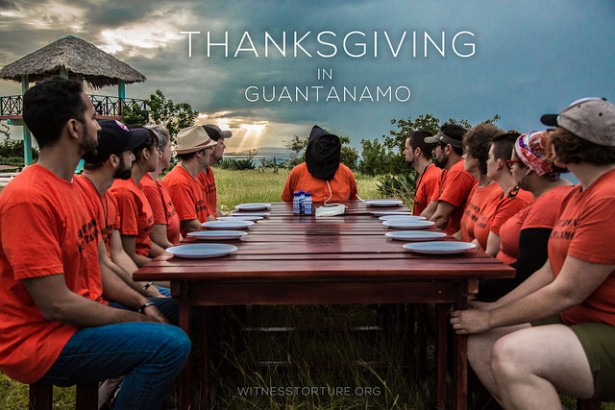 These two histories — the torture and humiliation inflicted by the CPD and the terror practiced at Guantánamo — are deeply connected and never leave me. I came to Guantánamo, in part, to carry with me the stories of the African American men victimized in Chicago and to join them with people whose torture is more widely recognized. Throughout my time in Cuba I kept thinking: So many Americans still tolerate Guantánamo because we tolerate routine cruelties in our domestic detention and incarceration system.

There is at least one direct connection between these brutal systems of domestic and overseas detention. While in power, police commander Burge led a cadre of detectives who occasionally cherry-picked individuals from the black community who fit the profile of an alleged suspect and inflicted electric shock, mock executions and physical beatings on them in remote areas of the city. One such detective, Richard Zuley, completed his training under Burge. Zuley, as The Guardian reported last February, abused suspects, including by shackling them to walls for hours and making threats to harm their family members.

Also a U.S. Navy reserve lieutenant, Zuley was sent to Guantánamo in 2002 to conduct interrogations. He is alleged to have run “one of the most brutal in the history of the notorious wartime prison.” At Guantánamo he used sleep deprivation, exposure to extreme temperatures, and vivid death threats. As in Chicago, the result was a false confession. In Zuley, torture techniques practiced in Chicago jails were literally exported overseas. I wonder how many other police and corrections officials similarly applied their dark trade in War on Terror facilities, whether as private contractors or uniformed military.

Race is another link between torture at home and abroad. Those abused in Chicago were almost exclusively African American men. The detainees in Guantánamo have been Muslim men mostly from the Arab world and Africa. All these populations were, in essence, profiled. Chicago police presumed the criminality of black men. The U.S. military and CIA first detained, and then tortured, countless Muslim men based on flimsy — and even non-existent — evidence of connection to terrorism. Torture inflicted by the modern American state is in part the racist targeting and dehumanization of people of color.

While it’s widely understood that it destroys the individual body, torture damages the collective body of the wider community as well. Social psychologist Ignacio Martín-Baró argued that systematic state terror, including acts of torture, serves to keep a population in a state of fear and disconnected from one another. Communities feel they have no option but to comply with those who uphold the security of the state. Torture then serves as a psychological tool, a weaponized form of hatred that inflicts fear and anger among those targeted. Mass incarceration and state violence in all its forms destroy the social fabric of communities of color. Anti-blackness and Islamophobia are, in this way, two sides of the same coin.

Their repercussions linger, for the city of Chicago, the United States as a whole, and even for those set free. Individuals, families and communities bear the scars of torture long after the violence stops. In Chicago, the Reparations Ordinance includes stipulations that begin to address healing for the communities targeted by Burge: a mandatory history curriculum outlining Burge’s reign of terror in Chicago Public Schools, a public memorial honoring the survivors, and a community center on the South Side that will offer therapeutic services, job placement resources, and healing spaces for the survivors and their families. The directive of reparations goes far beyond merely financial compensation.

Some would argue the final star on my shirt now be filled in. The torture survivors of Burge’s reign of terror have been publicly recognized, their small settlements scheduled to be dispersed. But the wider story of America’s web of torture remains. Guantánamo lingers on the outskirts of American politics, a prison I saw with my own eyes last week open and in operation. Until the men are released and some semblance of accountability is determined, the survivors and their communities — as well as the American public — will not be able to start a process of healing. These two histories, forever linked in my mind, will continue.

Occupy Democracy brings London a blast from its past