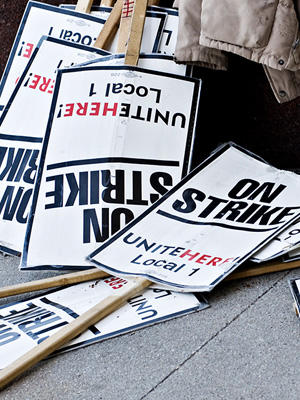 Working In These Times has an interesting post about the decline of labor activism in the United States. According to new figures released by the Bureau of Labor Statistics, union elections have dropped by 60% from 1997-2009 and only five “major strikes” (involving 1,000 workers or more) occurred last year—the lowest number since BLS began recording strike data in 1947. Working attributes these declines to three factors—unionbusting, outsourcing, and union leader incompetency.

As labor power weakens, employers have doubled their use of illegal unionbusting tactics since the 1990s, according to a study by Cornell’s School of Industrial and Labor Relations. Currently, 34 percent of employers fire union activists to intimidate other workers from joining a union. Studies show that without such threats, 58 percent of the workforce would be willing to join a union. But intimidation tactics make that virtually impossible.

The threat of outsourcing makes it increasingly difficult for unions to organize workers as well. Since 2000, 2 million jobs in the more heavily unionized manufacturing jobs have been lost to China. Outsourcing causes unions to not only lose members, but makes it tougher for unions to organize new members.  In 57% of all union drives, employers threaten to move factories if workers unionize—a threatthat  is very real.

Labor leaders also have played a very big role in labor’s decline. While the labor movement has lost 1.1 million members, the salary of top labor officials’ salaries has nearly tripled, according to a recent study by Labor Notes. If unions capped their total annual compensation at $150,000, they would save the labor movement $143 million dollars annually. At a time when unions are laying off young organizers as they lose members, there’s no reason why officials should take such exorbitant salaries.

This is important gut-check analysis, as it will hopefully help labor think about solutions to these problems, which admittedly aren’t easily solvable. But American labor activists can look to other countries, where strikes are quite prominent, such as the UK, for inspiration and advice on overcoming these hurdles.

Teaching peace from a dictatorship

The decline of labor activism in America