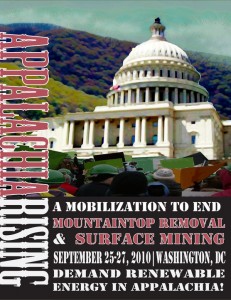 This weekend I joined over two thousand people in Washington, DC for Appalachia Rising, a conference and march against mountaintop removal mining. The march paused in front the Environmental Protection Agency and PNC Bank, which helps to finance mountaintop removal, before concluding in front of the White House, where around one hundred activists were arrested for nonviolent civil disobedience.

Appalachia Rising will likely prove to be a historically significant event, as this is the first time that a broad coalition of organizations, mostly based in Appalachia, came together to organize a large nationwide march against mountaintop removal.

Mountaintop removal has had devastating consequences for the region, including poisoned drinking water (which frequently comes out of the faucet black, red, or green) and deadly avalanches, flooding, and mudslides. It also puts miners out of work, since mountaintop removal requires only a third of the number of miners required for underground mining. Coalfield residents feel earthquake-like blasts while the mountains are being exploded and endure loud electronic beeping at night. Dust from the blasts can coat houses and roads, sometimes rendering the painted lines on the highway invisible, endangering drivers.

Appalachia Rising was a blue-collar and grassroots event, with most of the organizers and participants hailing from coal mining regions. In an article that offended a number of the protesters, the Associated Press smirked that the march was a “festive” gathering of bearded hippies with facial piercings, chanting “old standbys” like “We Shall Overcome.” What that reporter did not realize, or did not acknowledge, is that many of the beards, red bandanas, bluegrass music, overalls, and the “ho down”-style dancing of protesters awaiting arrest were not counter-cultural fashion statements but everyday expressions of Appalachian culture. I probably learned more about the history and culture of Kentucky in the three days I spent at Appalachia Rising than in the past four years of living there.

Many participants in Appalachia Rising joined the movement against mountaintop removal at great personal risk. As speaker Lorelei Scarbro stated, “You literally put your life on the line any time you stand up against coal in coal country.” Larry Gibson, founder of Keepers of the Mountains and a hero in the anti-mountaintop removal movement, spoke of shots fired at his home and the killings of his pet dogs.

On the bus back to Kentucky, I interviewed Rick Handshoe, a member of Kentuckians for the Commonwealth and a case in point of the intimidation faced by Appalachians who resist the coal companies. Handshoe, a soft-spoken man in his fifties who lives in eastern Kentucky, has become a noted whistleblower, seeking the aid of the EPA in his fight against the coal companies and corrupt Kentucky bureaucrats in league with big coal. He explains that he joined the fight against mountaintop removal for his children, who suffered sore throats and respiratory problems for years due to exposure to methane gas produced by mountaintop removal mining. Handshoe now spends nearly all of his time fighting mountaintop removal. “This is not what I planned to do when I retired. We have had to become self-trained hydrologists, engineers, and lawyers just to survive.” He has faced threats of violence and imprisonment and even a recent threat that his retirement benefits will be cut off by the state.

Coal companies sponsor massive propaganda campaigns to persuade Appalachians that their livelihoods depend upon coal and that “outsiders” who protest the industry are just “tree-huggers” who do not care about the people. The Appalachia Rising event sought to counteract those myths. While many participants spoke of their deep love or spiritual reverence for the mountains, the primary focus was upon the struggles of the Appalachian people. Indicative of this focus were a conference session aptly titled, “Environmentalists vs. Labor: A False Dichotomy,” and t-shirts reading, “What you do to the mountains, you do to the people.” While the Appalachia’s long, bitter struggle against economic and political control by the coal industry is far from over, Appalachia Rising is a sign of hope and the beginning of a national movement against mountaintop removal.

What does it take to organize a workplace?

What does a book have to do with a movement?