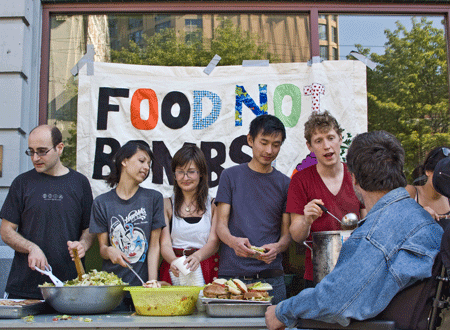 Last week, Act Now!, The Nation’s activism blog had a nice post on the work of Food Not Bombs. Described by one of its founders Keith McHenry as a “franchise collective,” it:

…in thirty years has grown from a small idea in which eight young antinuclear protesters cooked for their friends in Harvard Square to a global food movement dedicated to the principle that access to food is a right, not a privilege. Beginning as a protest against military and nuclear spending while the basic needs of so many Americans were still unmet, Food Not Bombs now boasts more than 1,000 chapters worldwide.

FNB is not merely an activist group though, but one that re-envisions every aspect of American life.  It resists taxation and bureaucracy by organizing as non hierarchical, unincorporated collectives.  It acts on its moral imperative as well, by serving meatless meals to people who need food regardless of income. FNB is an extraordinary actor of nonviolent social change.  As the article’s author Jennifer Mahoney writes:

Each chapter provides free meals—activists collect food from bakeries, grocery stores and restaurants who agree to give them any surplus, and then cook in visible outdoor locations, keeping regular hours so that their most frequent customers, often mothers with children, know when to find them—but also organizes around local issues like affordable housing, transportation alternatives, joblessness and militarism and supports related radical initiatives being staged by other groups.

It has inspired countless groups, from Bikes Not Bombs in Boston to the Campus Anti-War Network which declares loudly at their rallies, “BOOKS NOT BOMBS.”  FNB’s influence is unprecedented for such a radical idea, but it’s one that deserves mimicking everywhere.