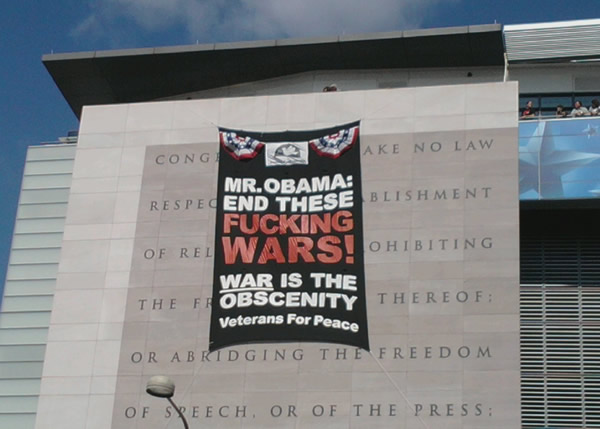 I recently interviewed a radical queer activist who told me that he believed his actions – stampeding upon churches that preached anti-gay messages, staging a kiss-in at the Academy Awards – were the only way for his cause to be acknowledged.  After all, in his time (the 1980’s and 1990’s), many of his friends were dying of AIDS, and no one was paying attention.  While many mainstream GLBTQ groups called their actions defaming, this group of activists believed that the silence surrounding the disease was the true problem.  That acting nice, in short, got them nowhere.

You could say the same thing about the recent step taken by members of the group Veterans for Peace, who recently, as seen above, “dropped [a] banner down the front of the Newseum, while others distributed special edition copies of the War Crimes Times, explaining the action and what they considered obscene,” according to this piece in Common Dreams.

While militant, and even shocking, the veterans of VFP, you could say, are shaking the boundaries of nonviolence by explicitly using one of the most derogatory, inflammatory terms in the English language.  And that they are hanging the banner on the building’s First Amendment wall says something, too: the obscenity, they indicate, is not the foul word (“fucking,” in this case) but the act of war.

I think it’s an effective, multi-dimensional message.  You have to think for a second.  But you also have to know what the reference is to, so the effect may not be immediate.  It may only appeal to a small group.  (For instance, would a tourist who is visiting DC for the first time know that this wall has the First Amendment on it?)

I’m torn on this one, folks.  What do you think?  Do you think this is nonviolent, considering the language?  That the confrontational manner is effective?  I’m curious, drop me a line on here.

‘A Vision for Black Lives’ is a vision for everyone

The Flood Wall Street 10 fought the law and won