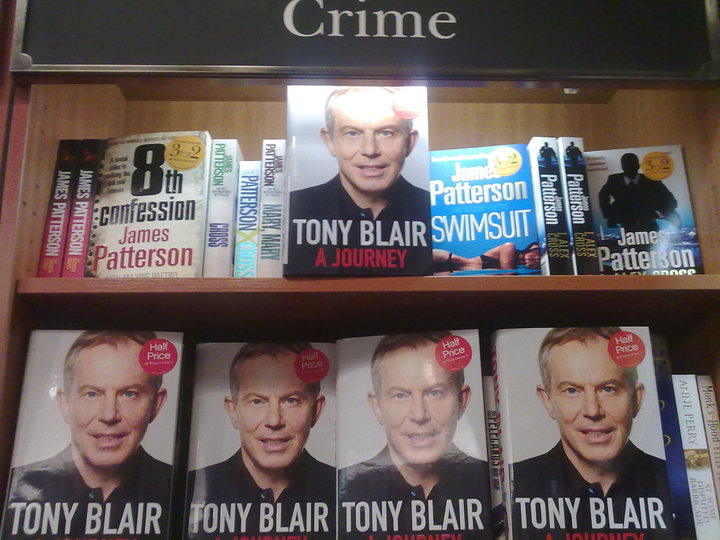 Pelting Tony Blair with eggs and shoes at a public signing of his recently released autobiography is one way to protest the former British Prime Minister’s record on Iraq–albeit cruel and divisive. Thankfully, another protest that is explicitly nonviolent and far more creative has emerged.

Since Sunday, thousands of people have joined in support of a Facebook page called “Subversively move Tony Blair’s memoirs to the crime section in book shops.” There are already more than 200 photos of the book having been surreptitiously relocated. Many copies have also been turning up in the Dark Fantasy, Horror and Science Fiction sections, as well as the toiletries aisle in supermarkets.

According to the Telegraph:

Euan Booth, 24, a trainee nurse from Oxford, who helped set up the Facebook group, said he saw it as a good way of registering non-violent protest against the former Prime Minister.

He said: “I’m not an activist, just a voter who is still furious that he is able to lie to the British people, day after day, but this time earn money from it.

“This is a peaceful and mischievous way of making your point if you feel the same way. It’s a non-violent display of anger using the materials given to me – his book and the crime section – they’re both there, I just put them together.

“It was pretty funny seeing the book still in the same section this morning when I went back in to check.”

Nevertheless, the book has been selling incredibly well, which might lead some to call this form of protest a failure. But success and failure in this context are hard to measure. Sure the egg and shoe throwers helped get Blair’s subsequent public signings canceled—a measurable accomplishment, no doubt—but they did far less to stir the kind of inner thought that inspires action and leads to change.