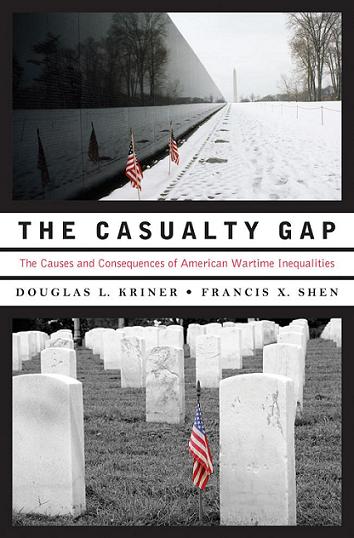 International relations scholar Andrew Bacevich has been one of the most important critics of American warmaking in recent years, not least because of the convergence of three aspects of his biography: he is a self-described conservative, a retired Army officer, and the father of a soldier killed in action in Iraq. If it is true that only Nixon could go to China, perhaps only a Bacevich can make the American center see the error of its unchecked militarism.

In a new essay in The Nation, a review of Douglas L. Kriner and Francis X. Shen’s The Casualty Gap: The Causes and Consequences of American Wartime Inequalities, Bacevich takes on the dynamics of American political culture that allow us to enter war after war, considering two very good reasons not to: (1) war’s casualties are now disproportionately among the poor, and (2) with debt and unemployment mounting, war is more expensive than ever.

Kriner and Shen provide data to show that (1) was not always as it is now:

Only in the case of the war against Germany and Japan did “the nation’s long-held norm of equal sacrifice in war” prevail. Given the reliance on conscription to raise the very large forces required for that conflict along with the military’s refusal to induct anyone who didn’t meet strict, if arbitrary, health and literacy standards, “the poorest and most undereducated counties actually suffered lower than average casualty rates.” In 1941–45, there was no casualty gap. During the cold war, fairness vanished. With the US intervention in Korea, Kriner and Shen write, “the data show a dramatic change: strong, significant, socio-economic casualty gaps begin to emerge.” The evidence they amass strongly suggests that this gap widened further during Vietnam and became greater still when the Bush administration invaded Iraq.

Bacevich goes on to take the consequences of their conclusions further than do the authors:

For Kriner and Shen, the policy implications are clear: citizen awareness of the casualty gap can serve as a “democratic brake,” helping to avert ill-advised or unnecessary wars. The key to activating this brake, they believe, is to “encourage an open discussion of how the burden of wartime sacrifice … is borne differently across the country.” Open discussion will raise public consciousness, constraining warmongering policy-makers as a result. Would that such expectations were even remotely plausible. The authors’ faith in the power of “open discussion” is touching but profoundly naïve.

Although Americans more generally might bemoan the casualty gap, they won’t exert themselves to close it. The reason seems quite clear. Casualties affect public perceptions of policy when they hit close to home, when the sense of loss is direct, immediate and palpable. Yet the communities on whom the burden of sacrifice falls most heavily are precisely those that wield the least clout. Not having much money, they are easily ignored. “Citizens from low-income, low-education communities,” Kriner and Shen write, “are disproportionately less engaged in politics than their fellow citizens from socio-economically advantaged communities.” “Less engaged” is, to put it mildly, an odd formulation. The plain fact is that in Washington the less affluent are less likely to get a hearing. “The populations with the most to lose in war become those communities with the least to say to their elected officials.” That’s one way to put it. Another is that these communities are most easily blown off.

He insists that, for us to stop making war so indiscriminately, the cost of war has to hit us where it hurts. (Bacevich, of course, knows this far too well.) He turns to issue (2):

Consider the following back-of-the-envelope calculations. Since 9/11, the Pentagon budget has more than doubled to approximately $700 billion per year. Let’s peg current war costs at $400 billion annually (almost certainly a lowball estimate). There are approximately 150 million single or jointly filing taxpayers in this country. Reduce that number by the 30 million veterans who have already given at the office, as it were, and the per capita cost of ongoing US wars comes to more than $3,300 per annum. Add that as a surcharge to every American’s tax bill (or subtract that amount from the annual payout to Social Security recipients), and the “democratic brake” will bring American wars to a screeching halt.

As often-incoherent assaults on government spending and out-for-number-one slogans like “don’t tread on me” become the prevailing substance of American political discourse lately—and it’s a shame to say it—Bacevich could be right. If we can’t get one another to care about innocent people being killed by our weapons in Iraq, Afghanistan, and Pakistan, or about the human cost of our “wars of choice” being suffered by poor Americans, or even about the fiscal irresponsibility of it all, reaching people’s greed may be the only way to convince them to approximate compassion.

Why are the Danes so happy? Because their economy makes sense

Sending the poor to die (and paying for it)