Much has been made of Saturday’s Rally to Restore Sanity and/or Fear, particularly the way Jon Stewart and Stephen Colbert used humor to criticize the media, Glenn Beck, the Tea Party, and, in general, traditional forms of protest. While I’m all for humor, and think it is one of the most important tools we have to expose the truth, there is a point where it ceases to be useful. Take for instance, the following sign that, according to Boing Boing, was made for Saturday’s rally: 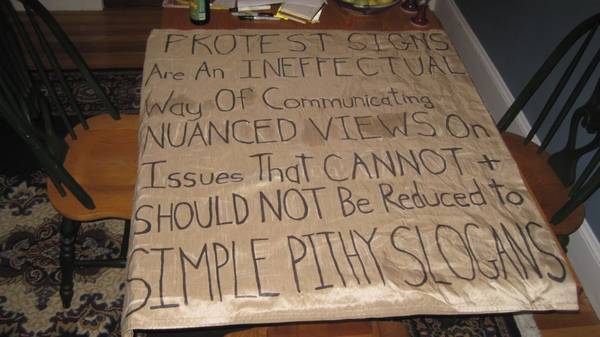 On the one hand, there’s no doubting its visual irony. Protest signs are typically pithy and this one is uncharacteristically wordy. That’s funny, for sure. But the message itself loses me. It’s too extreme of a position to be true and it belies historical examples of the contrary.

When I first read this sign, I immediately thought of the signs carried by the striking Memphis sanitation workers in 1968. 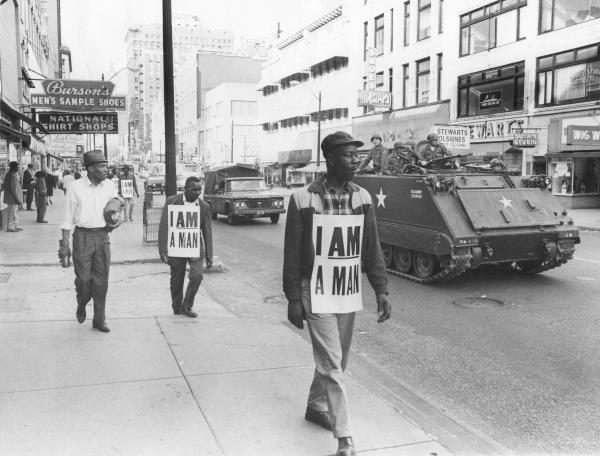 Having recently been to Memphis and seen the wonderful exhibit on the sanitation strike at the National Civil Rights Museum, I don’t think one can say that protest signs are ineffectual. These signs, with their “simple pithy slogans”, dramatized the plight of the sanitation workers in a way that is still iconic today.

In a movie that shows at the museum, civil rights leader and Memphis-native Rev. Billy Kyles says, “One of the things that was terribly significant was seeing these men with signs, which didn’t say peace, didn’t say freedom, didn’t say justice. All it said was, I Am A Man.”

This makes me think that we must be careful with our humor. There is a time for irony, snarkiness and smugness. And there is also a time for sincerity and heartfelt appeal. We mustn’t forget that we can reach people with simple honest words and that sometimes it’s more effective to do it that way.

There were many signs at Saturday’s rally that rightfully made fun of the ignorance and hate being projected on Muslims. But what if instead of a sign like this one—where the point is to ridicule, not connect with, the opposition—there were signs carried by Muslims that said “I Am A Human.” What if we really made it that simple?

The Radical Independence Conference’s promise of “another Scotland”

The power of simple protest messages