The residents of al-Arakib, a Bedouin village in Israel’s Negev Desert, refuse to leave and they refuse to cease rebuilding, despite 17 demolitions in a span of just eight months –  the most recent taking place on Wednesday.  As the number of demolitions has risen, the severity of force used against al-Arakib residents, who rightfully resist the demolition of their homes, has also risen. Those at the scene on February 16, reported that Israeli forces arrived and immediately began shooting tear gas, stun grenades, and foam-tipped bullets at the residents. Tamar, an Israeli activist who was present during the most recent round of demolitions reported on the Israeli forces’ indiscriminate use of violence:

The police harshly beat the women and children who were standing in quiet protest, they simply beat women and children…I stood alongside a woman who was beaten by four police officers, actual fists in her face, ears and neck, in addition to kicks until she almost lost consciousness…people are sitting on the ground, in the rain, and not moving, women and children. The police shot stun grenades and foam bullets directly at the women, at point blank.

The Bedouins of al-Arakib comprise a few hundred of the more than 100,000 Bedouin citizens of Israel living in the Negev. Nearly half of the that population live in villages that the State of Israel doesn’t officially recognize. Unrecognized villages are not connected to the electrical grid, water mains, or trash pick-up and sewage systems.

Many are calling the demolitions in al-Arakib the “ethnic cleansing of the Negev Desert.” Demolitions carried out by the Israel Land Administration are made possible by the overwhelming presence of Israeli riot police and their gross use of force. The demolitions are an attempt to Judaize more territory in the Negev by forcing Bedouin residents off their ancestral land and into the towns that Israeli created in the late 70’s/early 80’s for the purpose of concentrating the Arab Negev population.

In the most recent demolitions, activists reported that the bulldozers that razed the dwellings and animal enclosures were not Israel Land Administration equipment, as used previously, but were marked as belonging to the Jewish National Fund (see here and here for harrowing video of previous demolitions).

The Jewish National Fund (JNF) was established in 1901 to purchase land from the Ottoman Empire for the purpose of Jewish settlement. After the establishment of the state of Israel, the JNF morphed into a non-governmental/governmental hybrid. Today, the machinations of the JNF are virtually indistinguishable from the aims of the Israeli state.

Throughout its history, the JNF has has used tree-planting as a technique to demarcate Jewish land. Along with the judaization of the land through tree-planting often comes the physical erasure of any memory of Arab inhabitance. An example of the latter was the afforestation of Arab villages whose residents fled amidst the violence of 1947-1948 that prefaced the birth of the Israeli state. This event is referred to in Arabic as the nakba – the catastrophe. In al-Arakib, the JNF is using demolitions and afforestation for the same purposes as it has for decades – to cleanse the land of Arabs by creating a forest, and thus disallowing Bedouin residents from returning to the land they claim they have owned since the early 20th century.

As if the plot needed to thicken, GOD-TV, an international Christian television broadcaster boasting a half a billion viewers, has donated 1,000,000 saplings to the JNF. GOD-TV programming encourages viewers to “sow a seed for God” but GOD-TV and its viewers are, in fact, funding the uprooting of Bedouins from their ancestral lands.

Palestinians, Israelis, and internationals have voiced their opposition to the demolitions through their ongoing presence with the residents of al-Arakib in addition to organizing numerous demonstrations in the Negev, Jerusalem, and Tel Aviv. Activists gathered outside of the JNF Jerusalem offices on 1 February 2011 to protest the attempted displacement of al-Arakib residents. 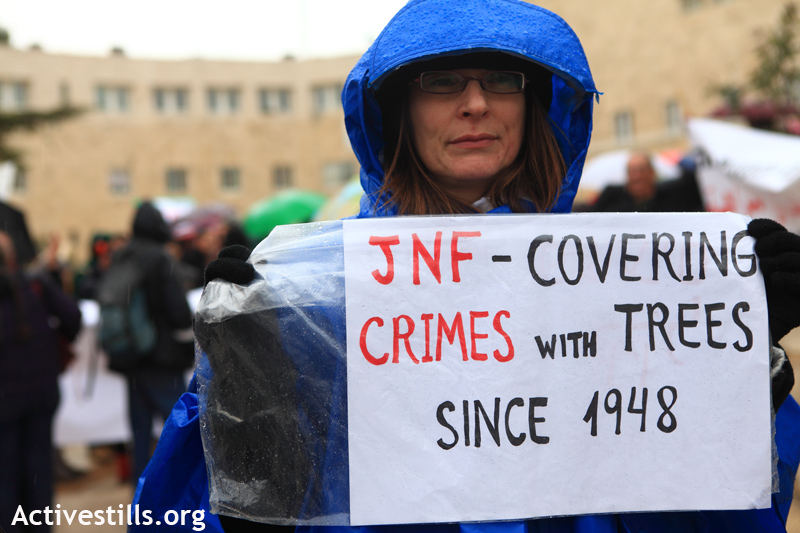 For those not able to be present with those in al-Araqib or at demonstrations in Israel, independent journalist and author Max Blumenthal has suggested posting links on the facebook pages of JNF and GOD-TV to show the destruction, violence, and ethnic cleansing they are perpetrating. GOD-TV seems to be feeling the pressure and recently released a statement attempting to distance themselves from the actions of the JNF in al-Arakib. (Sorry, no dice, GOD-TV. You’re guilty as charged.)

The Israeli government and the Jewish National Fund, with the support of GOD-TV, are funding the ethnic cleansing of the Negev through ongoing demolitions, and the 18th demolition is just around the corner. At the time of writing, I just received an email that Israeli activists are organizing to go down to al-Arakib in large numbers because the villagers sense an impending demolition. Surely al-Arakib will be demolished again, and certainly, al-Arakib will be rebuilt. Israeli forces recently started removing all the destroyed building materials after demolitions in hopes that al-Arakib residents would be less apt to rebuild – needless to say, the idea was a failure. The resolute steadfastness of the people of al-Arakib is portrayed in the words of resident Hakima Abu Mdeghem, mother to nine children:

“We need to teach even the smallest children that this is our land, and we can’t leave it, no matter what happens.”

Time to speak up — women’s prison resistance in Alabama