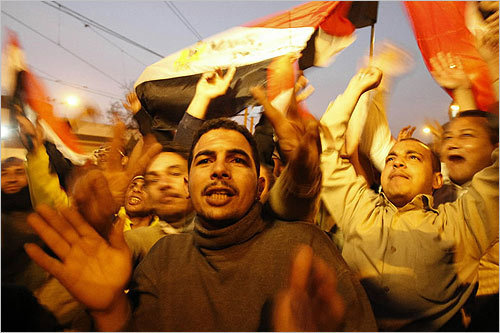 This is the fourth installment of their responses, which we’ve been presenting as a series over the last few days. (Here are links to Part 1, 2 and 3.)

What do you think, above all, made this victory possible?

“There is no single factor that can explain the success of the democratic movement in ousting Mubarak. As with other victories involving broad-based civil resistance, this one required (a) language about the need for action that galvanized the public’s mind, lifted its heart, and created an existential moment for the nation, (b) acting in the wake of a popular event (Tunisia) and rage from a regime crime (the Khaled Said murder) to mobilize people for specific action, using social media in that work, (c) soliciting and welcoming diverse participation from all kinds of groups in the society, (d) nonviolent discipline, (e) hailing the military and reminding it of its relationship with the people, to help defuse possible repression, (f) sustaining the pressure day after day so that the regime’s cost of holding control is racheted up, (g) diversifying tactics to complicate the regime’s work of coping with resistance, and (h) nationwide action, not just in the capital.  There are other factors, but those immediately spring to mind.” – Jack DuVall, President, International Center for Nonviolent Conflict

“The incredible passion and will of the Egyptian people to be free and their utter unwillingness either to give up or to be baited into violence.” – Mary Joyce, Founder and Executive Director, Meta-Activism Project

“Unity, planning and nonviolent discipline, those universal principles for success.

Unity activities where all of organizations have agreed to remove their individual symbols (including the cleanched fist of April the 6th) and replace them with only Egyptian flags which we could see in the later stages of the protest was inspiring. Not to mention impressive demonstrations of religious unity, Christian pro-democracy protesters protecting their Muslim collegues while they are praying, or thousands of Muslims greeting Christians who were having their ritual in the square reached and impressed the world as they happened in front of the cameras.

Planning for the overtaking of the pillars of support, starting with the police, which was overwhelmed in first few days, winning labour unions and workers, making military first neutral and then supportive and shifting international support by peaceful and inspiring protest and tremendous courage.

Nonviolent discipline, even if Mubarak has tried absolutely everything to provoke them to more violence and chaos was definitely one of the keys for success.” – Srdja Popovic, Founder, Centre for Applied Nonviolent Action and Strategies (CANVAS)

“Planning, planning, and more planning. The movement was able to keep the people of Egypt unified and, for the most part, nonviolently disciplined, even during the height of repression. That would not have been possible but for a couple of years worth of laying the groundwork behind the scenes. The other great advantage that the Egyptian people had over the regime is their spiritual resilence, or what Gandhi called ‘satyagraha’ (holding to truth). That spirit was infectious and empowering, and it is what finally shifted the balance to the people by lowering fear enough to make the threat of violence ineffective.” – Cynthia Boaz, Assistant Professor, Sonoma State University

“Decades of mobilizations by activists who have worked relentlessly for many years with the youth and professional organizations. Also, the ruthless and non-compromising Egyptian regime. The energy of youth who have been exposed to so many other communities around the world and know that Egyptians deserve better than what they had.” – Mohammed Abu-Nimer, Director of the Peacebuilding and Development Institute, American University

“For me, this sums it up: The wisdom to seize the moment. This does not mean spontaneous action or hasty organizing and decision making. It means many years of study and planning among different pockets of society — some dress-rehearsals and failures – all which lead up to seizing an opportunity.

All of us in the field of civil resistance are fully aware that Egyptian organizers had been planning for many years. There was Facebook activism on a grand scale, and many people were doing their part to expose regime corruption and police abuses. What made the recent victory possible was the planning done around the January 25th protest, seizing on Tunisia’s recent victory, and gauging the local public’s discontent against regional hopefulness.

Organizers of the April 6th movement, bloggers who had been reporting on human rights violations, internet technicians who worked for internet freedom, and a vibrant civil society including translators and nonviolent educators knew nonviolent theory and had lots of practice, and people knew and trusted them. All of this takes years of effort.

The well-known phrase, Knowledge is power, actually has its roots in a longer expression, “Human knowledge and human power meet in one.” I think this is true in nonviolent movements. Knowledge and collective power become the antithesis of fear. Organizers’ knowledge created confidence and courage in Egypt. The ability to harness people’s power through knowledge, translate that into action, seize an opportunity, and mobilize masses with confidence and truth – that’s what I call a victorious revolution!” – Vanessa Ortiz, Founder, In Women’s Hands

Rise up like an Egyptian: Key factors to victory