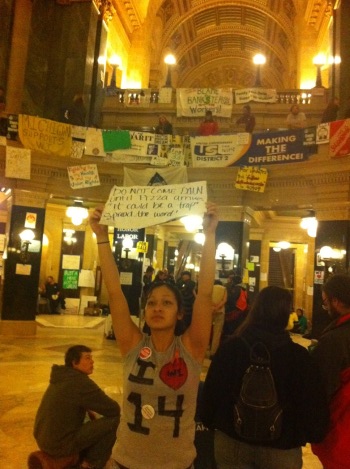 On Saturday night, after driving through the snow from his home in rural Wisconsin, Waging Nonviolence special correspondent Quince Mountain arrived in Madison, where for almost two weeks, protesters had been occupying the Capitol building in a historic effort to prevent the passage of Governor Scott Walker’s bid to strip away the collective bargaining rights of many state employees. I couldn’t convince him to sit down in the middle of all the mayhem and write us a regular dispatch, but what he did do was better: a play by play account of what he was seeing over text message.

I first heard from him at 9:15 on Saturday night.

Capitol is on lockdown for the night. How can u lock down an occupation? Protests are so bizarre.

Then, by 11, I got a disconcerting message.

I asked, “Why? What happened?” It wasn’t until almost two hours later that he responded.

No no. I was just hanging out talking w a cop in her car outside the Capitol.

She said there have been zero arrests the whole two weeks. And we hung out in her car and a delivery guy tried to give us pizzas “donated from Washington” but she couldn’t accept them.

The cops have been marching with the protesters twice daily. And I just read some of the cop briefing emails. Which strike me.

Wait, I should be clear. There may have been arrests. Madison pd is NOT the Capitol pd or the state troopers.

Plan for tomorrow according to email I saw is that everyone’s requested to leave the Capitol for cleaning by 4pm but that no one will be forcibly removed. Same as is stated publicly.

Yeah. Egyptians have donated food and pizzas and have sent messages.

Tomorrow breakfast w my cop friend and a state assembly staffer and an in-home therapist in danger of losing his job, among others.

I’m going to sleep I think.

After that, I didn’t hear from him again until 3:40 on Sunday afternoon. That’s only 20 minutes before the big crackdown was supposed to happen.

Trying to get into Capitol. Shouts of “we are all people” w response of “let us all in”

Air feels wet. State Troopers around. Kid with sign “walker is a turd”. I cringe at that kind.

But my companion rachel says in the last 10 min she’s heard more negative crowd comments than in past 12 days combined. Tense bc of troopers and impending ejection. Some angry/fearful she thinks.

Husky Dog with placard. Can only see. One side “he sucks”

These people do not seem like they’re leaving. The troopers have backpacks.

Friend sees sign and asks me “what’s a plutocracy?”. We look it up.

I keep wondering how many romances were formed in weeks of rotunda sleepover.

And then 4 pm in the afternoon arrived, the time when the police were planning to begin removing protesters.

Lots of cheering. Not sure why

We are marching. Somewhere.

I don’t understand what’s going on at all.

Some people are leaving. Others are cheering. ?

At 4:16, I heard from him again. More news, and more confusion. People were trickling out of the building, but many weren’t leaving at all.

I did notice this morning that parking is suspended in surrounding blocks til march 10.

Maybe 4 or 5 people have left this entrance so far.

This whole thing is so weird. It’s like playing paintball for peoples life prospects

By half-past 4, the procession out was continuing. Quince begins to learn more about the situation.

Like all these people are leaving. Peacefully. Because they’ve been asked to leave. And we’re standing around chanting “thank you” and “we’ll be back” and some people inside are chanting “let them in”

now we are singing happy birthday but I don’t know to whom.

But the thing that strikes me mainly is that all the people look all different and come together beautifully.

Guy inside says 700 ppl are leaving bc they were asked to. The second floor.

This is all so Weird nathan. It seems so inefficient.

Why does democracy have to look so much like a football rally?

Then, at 5:17, I get a surprise message. Quince, somehow, made it into the Capitol.

I’m inside building now. With holdouts.

And a million cops.

Building very much locked Down.

Each staircase blocked so people can’t go up. But people are still on other levels.

Can’t say here how I got in but it is a marvel.

There are amazing signs everywhere. Gandhi and Jesus and elevator workers and vets for peace and just plain info. It’s an education in itself.

From then on, the confusion he seemed to feel on the outside turns to awe. He keeps on describing the scene. I ask if there have been any arrests yet that day.

Not yet but soon.

I’m reading the info on How to Be Arrested just now.

It’s very different inside. These people are pros.

I mean, they [the people on the outside] really are the cheerleaders. And these folks are the team. They’re Amazing Nathan.

These people are going to try to stay.

The cops are so tired. And bored I think. These people just project Solid. It’s really something. I feel so privileged to see this.

the Madison cops are NOT going in the Capitol. So state troopers and Capitol police are inside. But I have not seen a single confrontation. I think some people (whoever is in here now) will resist arrest if it comes to that.

By “respectfully letting the officer know that they do not want to leave but cooperating physically”. OR “by respectfully refusing to leave and sitting down or going limp”. I think. At least that’s what one 8.5×11 paper tacked to a walls suggests.

There are also signs reminding protestors that the cops are on the same side.

It’s a wonder, seeing a house of government dressed up like this. There are papers and cardboard on every wall and moveon letters thick up the staircase and drum buckets and people with tally marks in black marker on their forearm– one for each day of occupancy. There is not a single bit of litter on the floor. In the center of the rotunda a guy is sleeping under a flag for warmth.

It’s 6 pm. There was a tense mood earlier, but now that has turned to celebration as it becomes clear that the protesters won’t be forcibly removed.

Is that a topless woman?!??

A few minutes later, more observations. The planned cleaning of the building—which was the unsuccessful pretense used earlier to remove the protesters—proceeds as planned, and the protesters cheer it on and help out.

For a second I thought it contained something really cool.

Someone is buffing the floor and ppl are cheering. A media photographer snapped an artsy shot of the streaks in his wake.

There are diapers and wipes and it looks like protesters brought their own TP and there are medics and legal observer and sleepy people and child care and people teaching classes and giving briefings and there are places to leave messages and “meet friends” and there are also apples and bananas which I can’t find.

Some chick just took my picture.

Favorite signs: “Seafarers for union rights” And “violinist for labor”

People are suddenly yelling like mad and cheering and standing. It’s off the hook

Quince isn’t sure at first why there is so much excitement. He asks if I’ve heard anything. I haven’t. Then he gets word:

Someone just walked by offering everyone batteries.

I thought I’d seen it all but there is a straight up choreographed dance routine. For real.

F—ing riverdance is here. They want their democracy back.

My friend Wajid is a leader of joyous song. I’m proud of him. He squatted for years on a holdout farm in the middle of Madison. I lived there a while.

(I am also, it occurs to me, the only clean shaven dude here. That’s not a cop)

These are the people who all refused to leave at 4.

I got in after that.

Apparently we get to stay the night. No arrests

So yeah. People totally get to stay. And they’re bringing us food. And everyone is facilitating the building cleaning. And tomorrow at 8am building opens again.

Cap Police filing out. One just said excuse me on his way past. Must be shift change.

There is some bread. U think it’s fair game?

Ppl doing cartwheels in the rotunda.

I bet people would think twice now before putting their state capitols in college towns. Or vice versa.

Now comes the part of the night when random people are approaching me for a hug. I would fit in better at a tea party rally.

An hour later, things get more serious, and people start planning for what will come next.

People are now in these little groups strategizing and even though I’m with my awesome friend Wajid I’m pretty uncomfortable.

Making ground rules for the meeting. Setting the agenda. Etc etc. There’s like 18 of us. Debriefing and.

At midnight and beyond. I go to bed in New York, but in the Madison Capitol, among the people who have made it their temporary home, meetings and discussions continue:

Wow. I’m really getting an education.

Big lesson so far is the beginning of a sense that waging nonviolent action is painstaking.

Text messages from the Wisconsin Capitol