Egyptian Google executive Wael Ghonim, just released from government custody, has emerged as the latest icon of the protests still going strong across the country. He created the Facebook page that became one of the major rallying points for protesters. The interview he gave with Egypt’s Dream TV has reportedly inspired thousands to return to the streets and keep up the fight. In the interview, he eloquently insists on the fundamentally nonviolent nature of their struggle. 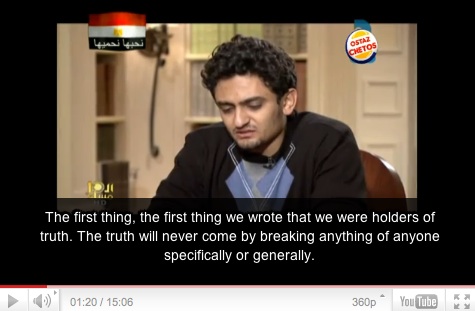 His speaking of “truth” immediately reminds me of Gandhi, who understood his nonviolent method as “truth-force”:

It is not given to man to know the whole Truth. His duty lies in living up to the truth as he sees it, and in doing so, to resort to the purest means, i.e., to non-violence. (source)

I don’t think that there’s a contradiction between Ghonim’s claim that the protesters are “holders of truth” and Gandhi’s that one cannot know “the whole Truth.” The protesters know some of the truth; they know the truth of their complaint. They know that, truly, injustice has been done against them, and that they must not relent until that truth has been felt by the oppressors.

But Ghonim does not claim to have all the truth. That, instead, is the claim made by those who use violence, who are so confident in the totality of the truth in their possession that they’re willing to destroy those who oppose them. To practice nonviolent resistance is to recognize that one’s opponents have some claim on truth as well, and that nobody has a monopoly on it.

This recognition is, perhaps, natural to the best instincts of the internet generation. We’ve seen again and again that information wants to be free, and that only injustice stands to gain from suppressing it.

Watch the full interview with rather imperfect English subtitles.

“This is the revolution of the youth of the internet”