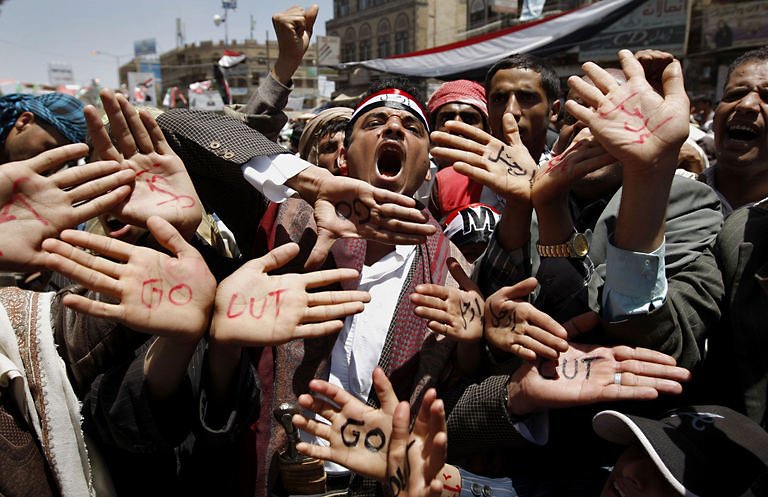 With all the ruckus of the U.S.-NATO intervention in Libya, even the in-depth 24-hour news coverage that saturated us with images of Egypt, Tunisia and Wisconsin have been relegated from the headlines to brief news bits.  Even more neglected is the case of Yemen, where pro-democracy protests have been rocking public squares for months. Using tactics such as sit-ins and civil disobedience, the opposition, with its plan for a peaceful transition of power, is growing in its support for Saleh’s deposition.  The pro-democracy movement has refused Saleh’s offer of amnesty to military and government dissenters and negotiations with the President broke down last week.  Since then, the violence against pro-democracy protesters seems to have increased and there is an emerging counter-movement supporting Saleh that has engaged in violence with the state security forces.  Yesterday, 1,600 people were injured by police in Taiz as the resistance spreads and President Saleh’s 32-year rule is unraveling. But the international community has refrained from weighing in on the Yemen uprising.

Context is everything in understanding why international diplomacy takes a front seat in the news cycle and the courageous people power and nonviolence sits quietly in the back.  In Libya, as this site has been keen to point out in various posts, the nonviolent uprisings did not coalesce into a movement because the context was not properly prepared.  As Stephen Zunes argued, Libya pro-democracy, nonviolent forces lacked strategy and when the violent, state repression came down with a heavy hand, they lacked the training and organizing to remain nonviolently disciplined.  The case for foreign military intervention was argued on humanitarian reasons (which are apparently of little concern, because thousands of Yemenis are being targeted by security forces loyal to Saleh and 300 have been reported killed).

Jeremy Scahill’s recent article, “The Dangerous US Game in Yemen” gives context for why there has not yet been a massive outcry of humanitarian support for the people of Yemen.  The U.S. wants Saleh in power in Yemen for the stability to continue its proxy-war against Al Qaeda which has found, strangely, enough state support in Yemen to not have fled to any other number of unstable areas to continue its activities (a place like, say, Libya).

The reason the U.S. is supporting the rebel forces in Libya is that Gaddafi has long been a thorn in the side of the American-led war on terror.  He has played a dicey game of diplomacy that kept him isolated from the U.S. but never a full blown target for American counter-terrorism (although Libya has long appeared on Cheney’s list of countries to attack).  So the understanding of how conflicts are characterized by the media, both mainstream and otherwise, needs to dig deeper into the unique, cultural contexts with which these uprisings arise and the historical contexts that determine why and when foreign military intervention becomes an option.  And then we must ask the question: how sincere can U.S. (or other foreign support) for people’s liberation movements be when they question economic and policy interests?

With any solid nonviolent movement, in addition to training, strategy and organizing, a solid analysis needs to take place.  For those of us who support democracy and nonviolent people power, we would do well to take the time to hit the alternative history books, media centers, and voices from people on the ground for the strengthening of our own contextualizing analysis.