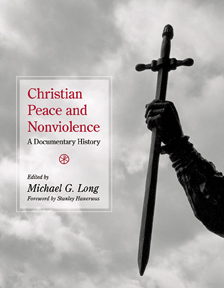 For nonviolent methods and convictions to have a future, they need to have a past. This is what makes accessible documentary works like A Force More Powerful (the book and film), Gandhi (the film), Parting the Waters (the book), and many more, so vitally important. For people to believe that they can meet their greatest challenges without resort to arms and slaughter, it’s incredibly empowering to know it has been done before, and that these ideas have been thought before. It has. They have. But the way history is usually told, and the way the history of ideas is usually presented, the story of nonviolence gets drowned out by the cacophony of battles.

Few histories of nonviolence have been so poorly remembered, and thereby obscured, as the history of Christian nonviolence. As the cover of Michael Long’s new textbook attests, the cross has been identified with the sword to the point that the two can seem indistinguishable. Christian Peace and Nonviolence: A Documentary History, published this year by Orbis, belies its cover. The primary-source texts that comprise it, from the Book of Isaiah to Andy Alexis-Baker, reveal not simply the centrality of nonviolence to Christian tradition but also the centrality of Christianity to the history of nonviolence in general. There’s Leo Tolstoy, whose pacifism inspired Gandhi’s, and Fredrick Douglass, whose Christian faith made him oppose even a war that promised to liberate his people from slavery. No less than Clarence Darrow, one of the 20th century’s greatest agnostics, relies on Christian language as he prophesies against Christian militarism. The depth and variety of Christianity’s resources for thinking about and acting with nonviolence are tremendous—and will be, to many, surprising.

The book’s basic simplicity underscores this. There isn’t any heavy-handed editorializing. After a two-page foreword by the distinguished pacifist theologian Stanley Hauerwas, followed by an even shorter note by Long on textual considerations, the documents it collects speak for themselves. Early Church Fathers like Justin Martyr, Tertullian, and Origen denounce the bloody normalcy of Roman life in the name of Christ. Desiderius Erasmus opposes his vision of a war-weary “Christian Prince” to Machiavelli’s cynical alternative. The voices of women—including Sojourner Truth, Jane Addams, Dorothy Day, and Shelley Douglass—make one want to hear the voices of more. Usual (and necessary) suspects like Martin Luther King, Jr., and Daniel Berrigan appear alongside lesser-knowns like William Stringfellow and Toyohiko Kagawa.

The upshot is: there has been, and continues to be, a rich tradition of Christian pacifism and nonviolent resistance, and it lies at the very core of Christian tradition in general. It is not a fringe, and it is radical only in the etymological sense. This volume—in which no selection is longer than a few pages—can only serve as an introduction, an invitation, and a reminder. There is so, so much more.

There is also, of course, another side to this story too, and it goes unheard-from in Long’s collection. We read A. J. Muste’s reproof of Reinhold Niebuhr’s “realist” militarism, but we have to go elsewhere to see Niebuhr’s own theological reasoning. The book shows the deception in the commonly-held view that Christianity sits well with armed conflict, but it would be no less deceptive to say that Christian nonviolence is the whole story of Christianity. Peter drew his sword against those who came to arrest Jesus, and Christians have borne arms ever since Constantine had his soldiers mark their shields with the sign of Christ—which also appears on the cover of Long’s book—at the Milvian Bridge in the year 312. This is a tension that Christian pacifists must confront and contend with: a savior worshipped as the Prince of Peace and yet who came “to bring a sword.” Making peace in the name of Christ, it seems, was never meant to be easy.

How movements can use drama to seize the public imagination

Letting Christian nonviolence speak for itself