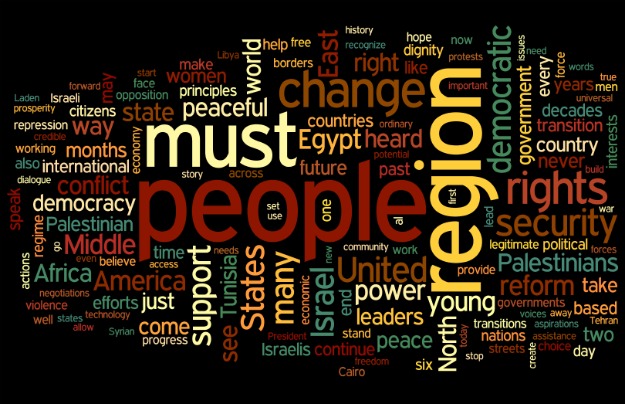 President Obama’s landmark speech on the Middle East at the State Department today is, in many respects, a vindication of the nonviolent revolutions that ousted longtime dictators in Tunisia and Egypt earlier this year. He declared, rightly:

Those shouts of human dignity are being heard across the region. And through the moral force of nonviolence, the people of the region have achieved more change in six months than terrorists have accomplished in decades.

The momentum of those and other uprisings throughout the region have given him license to make some pretty serious statements. First, he declared support for the ongoing popular movements in countries like Syria, Yemen, and Bahrain, and backed it up with massive aid packages to the fledgling post-revolutionary governments in Tunisia and Egypt. Second, he called for renewed Israel-Palestine peace talks based on the 1967 borders, to the dismay of Israeli leaders. He compared the Arab Spring’s activists to Rosa Parks and the Boston Tea Party—the gist being, We are with you.

No speech about the Middle East would be complete, of course, without mention of the three theaters where the US military is fighting these days: Af-Pak, Iraq, and Libya. Observes Amy Davidson at The New Yorker:

It was […] striking that, when it came to the countries in which our military is actively, directly committed, Obama’s words were among the least straightforward of the speech. On Afghanistan, he asked that we accept ambiguous terms about indefinite actions—breaking momentum, beginning to come home, continuing a transition—as meaningful ones. Iraq is variously a success story, a cautionary tale, and, oddly, an example of how “sectarian divides need not lead to conflict.” On Libya, he asked for credit for stopping a massacre and the spread of “the message” that force could keep one in power; this had to be artfully said, however, as people are still being killed and Qaddafi has not fallen.

He says all this while denouncing the Syrian regime’s use of force against its people, and al-Qaeda, and Iran. Again, rightly. But, as always, the call for nonviolence stops at the US and its supposed interests. Passing by the AIPAC website today—AIPAC being the major US lobby supporting Israeli militancy—one learns that it was just announced that Obama will appear at their 2011 policy conference. He can’t have said anything too unsettling, by their lights.

Such double-standard-bearing, double-talking use and misuse of nonviolence isn’t new in the rhetoric of and around this Nobel Peace Prize laureate. It began from the first words of his inauguration ceremony, when Diane Feinstein extolled from the steps of the Capitol the nonviolent civil rights movement that made Obama’s election possible in the first place, even as he promised to step up the war in Afghanistan. And today’s major Middle East speech certainly echoes his last one, in Egypt: Nonviolence for everyone else, wars without end for the US.

How many more revolutions will it take for the president to hear to the advice he gives to others for himself?

The problem with saying movements must be ‘totally nonviolent’ to succeed

It’s time to go on the offensive against racism