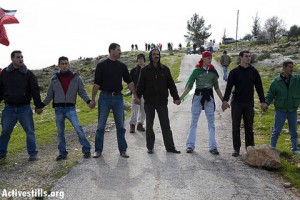 The fight for a free Palestine is being fought on many fronts right now. There’s an ongoing debate taking place about what will work and what won’t—everywhere from the United Nations to the streets of the West Bank, where teenagers argue about whether to throw rocks at Israeli Defense Forces soldiers. The question that remains, though, is whether what’s happening now is bringing the cause together or pushing it apart.

Mahmoud Abbas, the Palestinian president, is in the Netherlands lobbying for UN recognition of Palestine’s independence, while the US Senate has threatened to cut off aid to the territories if they continue pursuing the measure. But even Prime Minister Salam Fayyad is doubtful that the measure would accomplish anything, other than further disappointing his people and antagonizing their opponent. Israel, he insists, needs to be involved for any real change to take place. “Unless Israel is part of that consensus,” he says, “it won’t.”

Meanwhile, the latest Freedom Flotilla remains stuck in Greece, while Israel has been doing all it can to discredit it and prevent the intended voyage from happening. (See Kathy Kelly’s dispatch from Greece here at Waging Nonviolence.) The US has apparently pre-approved a violent reaction on the part of Israel against American citizens. Even some Gazans are concerned that the Flotilla won’t do them any good. Gazan media activist Mohammad Abu Asaker recently told me that actions like these might only be strengthening the hand of Hamas and its violent, failing tactics. “It is only the government in Gaza that gets the advantage of the media coverage from the Flotilla,” he said. “The people remain under the blockade, suffering.” Instead, he thinks, ships should be sent to the Knesset, and to the Capitol in Washington, DC, where policies are being made.

Back in the West Bank, thanks to peaceful protest, the IDF has finally begun rerouting the wall at Bil’in, which cut off the people who live there from their farmland. But in Bil’in, where nonviolent methods won a local victory, the Australian National reports that there’s no consensus:

Mr Abu Rahme admits that not everyone believes in the usefulness of peaceful marches. Many youth protesters throw stones at Israeli soldiers, provoking barrages of rubber-coated bullets, tear gas and a foul-smelling chemical spray called Skunk. “People have different opinions about non-violence but now, non-violence is important,” he said. “It’s our only option.”

As if to confirm this, a striking headline appeared yesterday in the Israeli paper Haaretz, quoting an IDF officer: “IDF has no way of stopping mass non-violent protest in West Bank“:

“A non-violent protest of 4,000 people or more, even if they only march to a checkpoint or a settlement, and especially if the Palestinian police does not deter them, will be unstoppable,” one IDF officer claims. “Such a great number of determined people cannot be stopped by tear gas and rubber bullets.”

Another high ranking IDF official serving in the territories claimed that “if we are to face protests similar to those in Egypt or Tunisia, we will not be able to do a thing.”

So far, however, Tahrir Square-style unified protests haven’t caught on in Gaza or the West Bank. As is the intention of Israeli occupation policy, the opposition is divided. Mohammad Abu Asaker reminded me that it isn’t just the Israelis who benefit from keeping Palestinians split. “Both Fatah and Hamas leaders are undermining the youth nonviolent resistance,” he said. “Both parties feel threatened by a youth movement calling for unity.”

Members of the establishment on all sides seem to have discovered that division is in their interest. But, that way, the cause of Palestinian freedom is going to have a hard time succeeding.

How technology is shaping creative activism in the 21st century

Palestinian cause remains divided and (so far) conquered