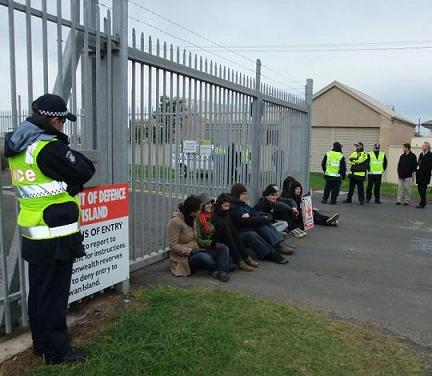 Over the last year and a small group of antiwar activists from Melbourne have been escalating our nonviolent resistance to the war in Afghanistan, focussing on the Swan Island Military Base off Queenscliff, Victoria. Australia has 1550 troops in Afghanistan; most are involved in mentoring and training Afghan National Army, but approximately 350 are the elite SAS, who are doing the targeted killings. Swan Island is one of two major training facilities for SAS troops, as well as the Australian Secret Intelligence Service (ASIS).

We have chosen the tool of nonviolent direct action to disrupt and expose this secretive facility and its involvement in this ten year war. This allows us to have a disproportionate effect for the amount of time, effort and people involved, and to have a concrete, measurable, local impact on Australia’s war effort.

In March 2010, four of us entered the base; two blocked the gate with a banner reading “Base Closed: War Out of Order,” while two went inside and switched off power grids and a satellite. Our charges of Commonwealth trespass were dismissed by a magistrate on June 16.

Immediately after court we returned to Swan Island with 40 supporters, and this time nine people were arrested blocking the gate. Their charges were also dismissed by a magistrate in October 2010.

From July 4-8 we have planned a week of activities, including daily blockades of the base, children’s activities, film nights and a public stall in Main Street. The intention is to build a community of resistance in a way which is fun, empowering and effective.

The week of activity is planned to coincide with the beginning of the Talisman Saber U.S./Australia joint military exercises. There will be a series of protests and civil disobedience actions around the site of those exercises as well.

In the space of a year the Melbourne movement has grown from just eight people being involved to more than 80. In the deflated Australian political environment, where apathy and self-interest rule the day, this is a significant achievement, though one on which we will seek to build. My sense is that this growth is largely due to the personal witness of those who have put themselves on the line and repeatedly borne witness to an alternative method of political engagement, which has expanded people’s imaginations and provided a focal point.

Each time we have engaged the Swan Island facility, we learn more about tactics and strategy, and adjust our actions accordingly. A huge strategic advantage with this facility is the fact that there is only one way on or off the island, and that is via a narrow bridge and causeway. This makes simple disruption vastly easier.

We’ve learned from mistakes – at last year’s blockade police asked us to move so that a staff member could get off the island to pick up their child from school. We refused, believing it to be a police tactic to clear the road. We have since acknowledged that as a mistake and apologised. We have changed that tactic; from now on during blockades, people will be able to leave, but not enter.

This lack of trust has led to us wanting to build it more deeply with police and base staff. As a result we have decided that we have nothing to gain by being secretive, and have accordingly made the week’s activities entirely open and transparent. This means there is no ‘in’ group and ‘out’ group, no need for closed meetings, no need to worry about who is listening. It also reduces the fear for those who participate, as everything is known beforehand. And strategically we cannot lose as there is no legal way the police can prevent a blockade being set up. As well as a website that describes everything we intend to do we have intentionally contacted base staff to build relationship, as well as police and others in the community. In this way we also hope to give them an opportunity to join us, or at least to act in ways that do not hinder us, as previous magistrates have done.

To this end, we have adopted the slogan: “Be brave – resist the war!” Our society has become so accustomed to war that it takes great courage to wake from that slumber. For those in the base whose lives revolve around war and military action, it will take enormous courage to even begin to extricate themselves. And for those of us who dare to resist a war that we could easily ignore without it affecting our lives, it takes at least a small amount of courage to step outside of mainstream behavior, and perhaps even bear some small costs for our truth. We have enormous political freedom in Australia, and this is one way we can use it in defense of those who are in positions far more vulnerable than us.

You can follow the events of the Swan Island Peace Convergence on Twitter: @simonmoyle, @matonman1 and @SwanIslandPeace as well as Indymedia Melbourne.

At least I have my health