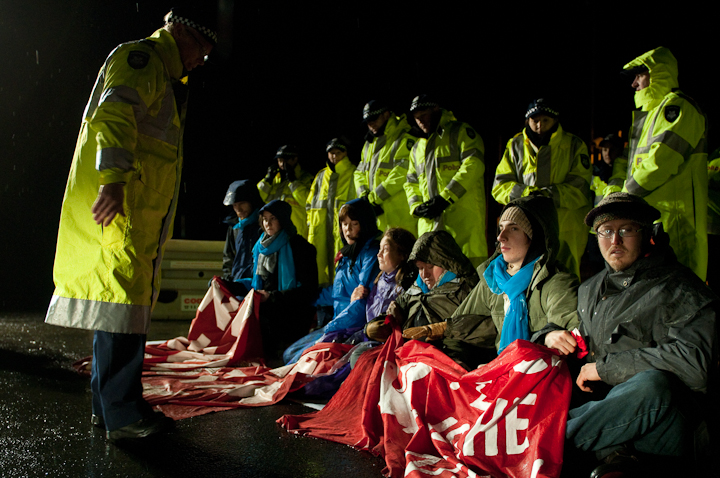 Last week, from July 4-8, some 50 people travelled to Queenscliff, Victoria, as part of the Swan Island Peace Convergence to enter into a week of protest and nonviolent civil disobedience to the war in Afghanistan. They came from as far away as Perth, Adelaide and Brisbane and as close as the small, sleepy seaside town of Queenscliff itself. The nonviolent resistance focused on hindering the operations of the Swan Island military base, a facility from which the Australian Secret Intelligence Service (ASIS) operates, and one which trains the Special Air Service Regiment (SASR), the elite fighters playing most of Australia’s combat role in Afghanistan.

Our goal was total Gandhian transparency – as we said at our first meeting together, we didn’t know if there would be police present, but if they were they would be welcomed as we had nothing to hide. Plans and reflections were put up on our website. We had been liaising with police for weeks beforehand, telling them everything we knew, which precipitated what they called “Operation Swan 2,” a containment force of approximately 180 police members including water police, the dog squad and mounted police. Given there were never more than 20 of us at the gates at any one time, this amounted to a serious overreaction on the part of the state, a trust deficit we were keen to undo.

Another factor was honesty and truth – if nonviolence is “truth force” then the force of truth must be given a chance to win the day. If as Gandhi said, “we each have a piece of the truth and the untruth” then it is only in putting our truths together that we both discover a larger truth, and discern the untruth.

The challenge is to design actions which most clearly demonstrate our truth, in a way which also makes clear our opponents’ truth, for people to discern. We chose to blockade as a way of publicly and visibly demonstrating our truth that those perpetuating the war through involvement in this base should not continue to do so. As such we began our blockades at 5:30am, when base staff begin to enter the facility.

Despite, or perhaps because of, the freezing weather, our relations with police quickly became warm and amicable (as an example, we received numerous song requests, one officer even researching his song choice on his home computer between shifts). Instead of the usual one day action, five consecutive days enabled us to establish a pattern of disciplined behavior despite individuals coming and going over that time. Conversations revealed that more than half of the police agreed with our stance on the war (which is representative of the Australian population generally).

But this difference between their personal views and their police role as agents of the state raised two questions: firstly, what does it mean that police individually believed the war should end, yet were prepared to defend this base and its involvement in that war? And two, how do we engage in a way which is friendly, open, and reduces fear, yet does not represent strategic collusion in the defeat of our aims?

Regarding the first question, part of our challenge was to expose the myth that police were “just doing their jobs,” and were therefore a neutral presence. That happened through respectful but vigorous conversations, made easier by the more robust relationships we had built. We pointed out that their current role was not neutral, but had taken the side of allowing the military to continue its role in this war. We asked what they would have done in Nazi Germany, and cited the inspiring examples of police and military in Egypt and elsewhere, refusing orders which perpetuated injustice. We respectfully asked them to join us, giving them a range of options from turning a blind eye to some of our actions, to openly refusing orders, to quitting their job.

The answer to the second question, of how you retain openness without colluding in your own policing, has been much more difficult. The relationship between the short term resistance to war and long term resistance movement-building (including police and military) is a complex and shifting one requiring constant discernment.

On the one hand, being entirely open allowed police to plan to neutralise our blockading strategy somewhat, physically moving us off the road without too much difficulty (here some stronger techniques would have helped). Even then, with such disproportionate resources (people, money, time) at their disposal, police will likely outnumber and outdo us for sheer physical force for some time to come.

On the other hand, not being entirely open also carries significant costs. Meetings need to be secretive, meaning only a certain elite have all the information, breeding mistrust, paranoia and internal power struggles. Police don’t know what they are dealing with, and may crack down harder out of fear-based reaction. This raises the bar of fear for everyone, making the participation of those on the edges of the movement less likely, reinforcing elitism and keeping the movement small. It also makes police and military collusion with us less likely as they are not even given a realistic opportunity to make considered choices.

Personally, I’m keen to build a mass movement of embodied changemakers who will put their bodies on the line to stop or hinder war preparations or warmaking. I love the small group of people I work with and want to be working with them in 50 years time; but I’d also like us to be surrounded by hundreds, if not thousands of others. I’m under no illusions as to how difficult that will be in this deflated political environment, or how long it will take, but it seems to me to be a worthwhile project to which to commit my life.

The Swan Island Peace Convergence ended with 10 arrests over four consecutive days of blockades but perhaps more importantly with some 50 people having been involved in a challenging, inspiring, empowering, fun series of events. We will continue to wrestle with these questions of strategy, principle and experimentation. But we will do so in the only way worthy of the struggle – actively, seriously, joyfully, and nonviolently.

Where’s the hope in the midst of a shutdown?