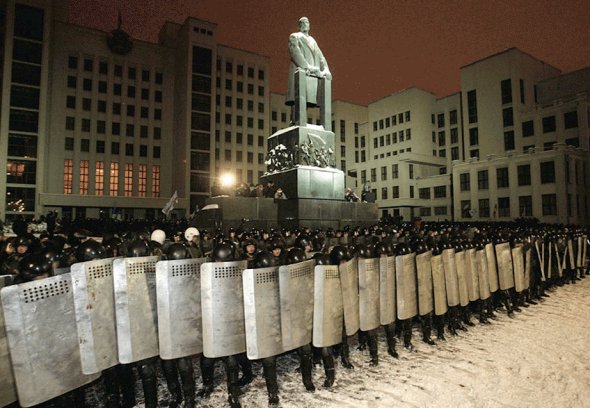 Perhaps you’ve noticed that, lately, some fiercely-suppressed protests in Belarus have been turning up in our Experiments with Truth feature (e.g., here and here). If you’re wondering what the deal is, be sure to take a look at Shaun Walker’s excellent (and excellently written) new report in Foreign Policy, “Bad Times in Belarus.” Walker was at the front lines of the protests on Belarus’s Independence Day, where he watched mass arrests and beatings by gangs of thugs for “swearing in public”—“a farcical charge rendered rather ironic by the fact that the only people I heard swearing the whole time I was at the protest on Sunday were the police and the thugs themselves.” This is indicative of how desperate things seem to be getting for Europe’s so-called “last dictatorship.”

The regime of Soviet-style holdout Aleksandr Lukashenko is in a crisis:

The main factor driving discontent in Belarus at the moment is economic. The active political opposition has always been there, organizing small protests after elections and traveling to EU capitals trying to drum up support—but Lukashenko has counted on the support of the more than half the population who took his mantra of economic stability and the “Belarusian miracle” at face value.

The “miracle,” though, depended largely on Russian subsidies, which have dried up. Nor will the European Union be of any help until Lukashenko relinquishes his political stranglehold some. As in the Arab world this year, economic woes have given courage to the political opposition. The question, as ever, is whether this discontent can coalesce into something unified and disciplined enough to do serious damage to the regime.

Walker also explains, from personal experience, how the struggle with Belarusian authorities is taking place as much online as in the streets:

During Wednesday’s protests, several fake Twitter accounts appeared, spewing nonsense and false information with dozens of tweets carrying the #minsk and #6julby hashtags that those taking part in the protests were using to keep tabs on events. A fake account for the Interfax news agency put out headlines like “Rights activists say that the police have acted impeccably.” Having tweeted actively from Minsk for a few days, I found myself on the government’s radar as well. My real Twitter account was cloned to make a fake account with a slightly altered username—which tweeted once a minute in Russian during the protest period, spewing out pithy bits of advice like “Don’t provoke the police.” Any real information about what was happening at the protests was soon buried in a mountain of spam tweets, meaning that those seeking advice on where to go using the hashtags were at a loss. Here again, the authorities are probably fighting a losing battle, temporarily annoying and inconveniencing the activists, but no more than that. This is not North Korea: In a wired, Net-savvy country, the attempts at online repression are likely to backfire.

Don’t miss the rest of Walker’s report. While you’re at it, also check out Sam Knight’s essay in this month’s Harper’s Magazine, “Inside the Snow Globe: Dodging the Secret Police with the Last Pollster in Belarus.” It’s a great piece of resistance reporting, but subscriber-only, unfortunately.