Even those of us who don’t bother owning stocks will find ourselves shuddering some at the newspaper these days: 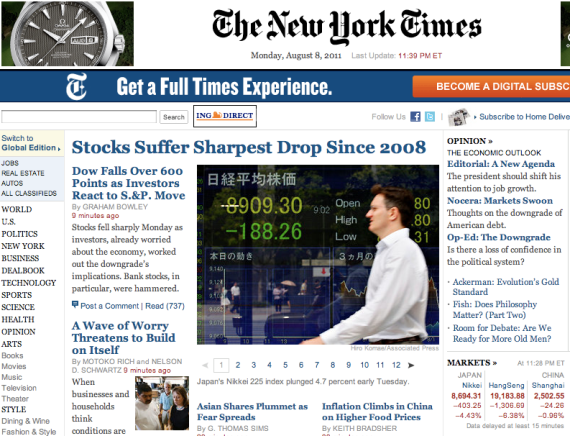 But don’t let it discourage you. The next few months are looking to be a busy season for organizing, protest, and nonviolent civil resistance in the United States, against the very corporate powers that have rigged this disastrous game, and that control the politicians whom we elected to serve the common good. At the very least the season will prove a fascinating laboratory of direct action, as each of these efforts adopts somewhat different means toward a more or less common set of goals.

We’ll be discussing each of these in depth at Waging Nonviolence as they develop, so for now, I’ll just keep it to brief mentions.

First, between August 20th and September 3rd, notables including Bill McKibben, James Hansen, Naomi Klein, and Danny Glover will be conducting prolonged (and, explicitly, dignified) acts of civil disobedience in Washington DC in order to prevent the construction of the Keystone XL Pipeline between the oil in Canada’s tar sands and Texan refineries. Might sound kind of technical, but actually the issue is quite clear, according to the group’s invitation:

As the climatologist Jim Hansen (one of the signatories to this letter) explained, if we have any chance of getting back to a stable climate “the principal requirement is that coal emissions must be phased out by 2030 and unconventional fossil fuels, such as tar sands, must be left in the ground.” In other words, he added, “if the tar sands are thrown into the mix it is essentially game over.” 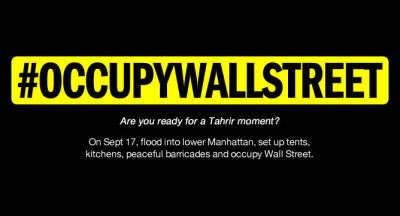 After that, you’ll have just a couple of weeks to recoup and get up to New York to #OCCUPYWALLSTREET, starting on September 17th. The “Culture Jammers” at Adbusters magazine are calling for 20,000 people to “flood into lower Manhattan, set up tents, kitchens, peaceful barricades and occupy Wall Street for a few months. Once there, we shall incessantly repeat one simple demand in a plurality of voices.” What’s more:

This could be the beginning of a whole new social dynamic in America, a step beyond the Tea Party movement, where, instead of being caught helpless by the current power structure, we the people start getting what we want whether it be the dismantling of half the 1,000 military bases America has around the world to the reinstatement of the Glass-Steagall Act or a three strikes and you’re out law for corporate criminals. Beginning from one simple demand—a presidential commission to separate money from politics—we start setting the agenda for a new America.

Depending on how quickly the ruling class can be brought to its knees, you may still be camped out there on September 24th, when the wonder-kids at 350.org are putting on another worldwide rally, “Moving Planet.” “For too long,” they say, “our leaders have denied and delayed, compromised and caved” on climate change.

Come on bike, on skates, on a board, or on foot. Come with your neighbors and your friends, your family and your co-workers. Come be part of something huge. It’s time to get moving on the climate crisis.

They’re encouraging people to create and join events wherever they find themselves, connected only by the tendrils of the internet. Just a few days later, though, we’re called upon to all show up in one physical place.

An ever-growing coalition of people and groups organizing for action on October 6th—the 10th anniversary of the invasion of Afghanistan—wants everyone so inclined to join them in downtown Washington DC for an occupation of Freedom Plaza, not far from the White House. The objectives are big ones: to build a movement that will put an end to militarism and corporate power in politics. They intend for the details to get worked out in the streets, along with music and art and performance. Among many others who have committed to being there, journalist Chris Hedges is on tape explaining his reasons:

Who needs stock, really, when there’s so much solidarity? And when stock is getting so worthless anyway, so quickly? Opt for something better.

If any other actions come to mind that I haven’t mentioned here, please tell me what I’m missing.

What role were you born to play in social change?

Economy got you down? Some opportunities to resist!