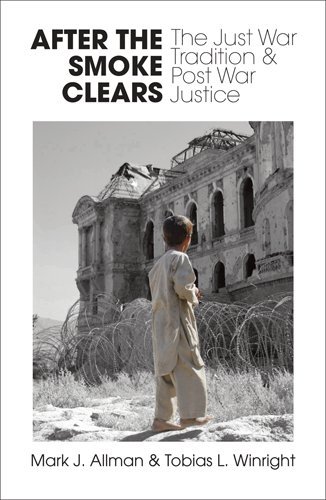 If linguistic precision has any importance, it might be time to replace the phrase “Just War” with “Just Slaughter.” What else is war but the organized and systematic slaughter of combatants and civilians? War is a word so routinized—the war on poverty, the war on drugs, the war on trafficking—that it lacks all impact. It’s like a piece of knotted wood sanded to flatness by a carpenter’s hand, the roughness smoothed over. When co-authors Mark J. Allman and Tobias L. Winright present themselves as “contemporary just war theorists,” as they do several times, it’s worth asking whether or not they would mind being called contemporary just slaughter theorists.

No hint is given in these pages, which means, for a moment of comity, we’ll have to go along with them and their theory that the mass murder of warmaking can sometimes be just. But it’s here that Allman and Winright are having trouble making up their minds. “War always remains an evil,” they say. “Perfectly just wars do not exist. When we speak of a ‘just war,’ we are really talking about a ‘mostly just war.’”

Come again? What does “mostly” mean? It would help if the authors came forth with a list of these kinds of wars. With more than 30 current wars or conflicts to choose from, as well as those of the 20th century—history’s bloodiest—the authors had plenty from which to select. But no list of examples of where the authors believe “the use of force, including lethal force, is justified” is offered.

As the subtitle states, the concerns of Allman, who is a professor of ethics at Merrimack College in North Andover, Mass., and Winright who teaches Christian ethics at St. Louis University, are focused on post-war events. Here again, precise language is needed. Instead of After the Smoke Clears how about After the Corpses Are Counted or After the Radiation and Plutonium Clears or After All the Amputees Get Their Artificial Limbs Fitted or After the Veterans’ Nightmares End? Admirably, the authors write that Christians are called to:

…pray for an end to war. But when war does happen, our task is not done; all that we do during war must be directed toward a just peace. Nor does our duty to build that just peace subside when the shooting does stop.

The authors argue that the building requires reconciliation between former enemies: “justice tempered with mercy.” Relationships need to be restored. Mutual forgiveness is essential. War criminals should be punished. Victims of wars deserve apologies, restitution and compensation. “The moral responsibility for war,” the authors write, “does not come to a halt when combat ends.”

Who can argue with that? Not to discount the idealism of Allman and Winright—who draw on the peace and justice statements of U.S. Catholic bishops and the Second Vatican Council’s “Gaudium et Spes”—but their case is weakened by the near absence of detailed examples where post-war justice has occurred. It isn’t enough to mention in passing the Marshall Plan or the economic aid given by the U.S. to Japan after the Second World Slaughter. Has a warrior state or tribe ever invaded an enemy’s border intent on carrying out the program of post-war justice Allman and Winright lay out? And then did it? If so, where, when and who? The authors are mum. Do they really believe that sides, say, in the 15-year conflict in the Democratic Republic of the Congo—with 5 million killed and hundreds of thousands of women sexually assaulted—are attentive to the theoretical and high-minded calls of two American professors for post-war justice via reconciliation, punishment, forgiveness and compensation?

Because the authors lean on Roman Catholic notions, only a few references are made to such pacifist theologians as Stanley Hauerwas and John Howard Yoder. Not much wiggle room is found in their teachings, as against what is present in the counsel of mainline churches and their acceptance of what one Jesuit at Georgetown University jesuitically calls “imperfectly just” wars. The difficulty faced by the well-intentioned authors, and one they don’t overcome, is trying to explain how justice can be delivered to civilians slain in war. They’re dead. As for the survivors, does payment of $2,000 from the U.S. military to a grieving Afghan widow come anywhere close to justice? On these questions, the authors’ aren’t exactly firing on all burners.

Instead of post-war justice, isn’t it saner to create pre-war justice, i.e., the only justified war is the one that’s never necessary to wage.

Colman McCarthy, a former Washington Post columnist, directs the Center For Teaching Peace in Washington, D.C. His most recent book is “Teaching Peace: Students Exchange Letters with Their Teacher.”

Vote for peace by not voting

Presence is the antidote to killing