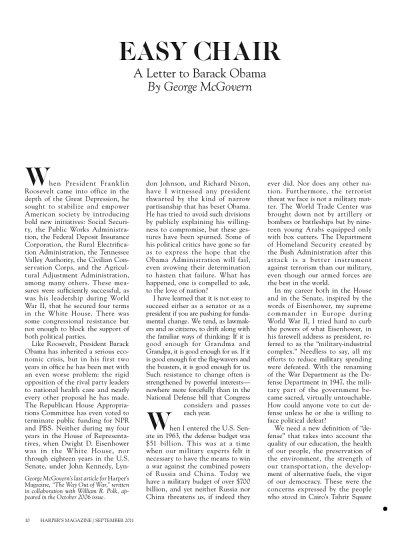 In a certain sense, retired politicians have it easy. If they’ve found a way to keep a relatively clear conscience, they have the benefit of tremendous insider experience—and all the ironclad authority that comes with it—and little actual responsibility. They can say what they want about what should be done, and make it sound real good, and all we can say is, Well, why didn’t you do that when you could have? But good-enough excuses always seem to be on hand. Easy-peasy.

It’s fitting, therefore, that Harper’s lent former senator, congressman, and presidential candidate George McGovern their “Easy Chair” column this month (subscription required). He put it to use with “A Letter to Barack Obama,” which lists a bunch of really decent ideas about what could be done to fix the country and, in particular, its economy. It dwells mostly with what’s probably the most obvious idea of them all—with the possible exception of campaign finance reform: cutting military spending. He cites his efforts, following Eisenhower’s famous warning, to hold back the military-industrial complex. Obviously that didn’t work. What we need now, says, McGovern, is

a new definition of “defense” that takes into account the quality of our education, the health of our people, the preservation of the environment, the strength of our transportation, the development of alternative fuels, the vigor of our democracy. These were the concerns expressed by the people who stood in Cairo’s Tahrir Square holding up their signs for more than two weeks this winter. Without guns, knives, or the use of their fists, they brought down the dictator who had exploited them for nearly thirty years.

He goes on to recommend the immediate withdrawal of troops from Afghanistan, the closure of US military bases in the Middle East (and probably in Europe and South Korea), a $500 billion cut in our $700 billion military expenditures, and taxation for the richest Americans (as Warren Buffett recently called for). Then he goes on to describe all that could be done with this money: high-speed rail, a new GI Bill, and the expansion of Medicare to all Americans.

Some common sense from George McGovern