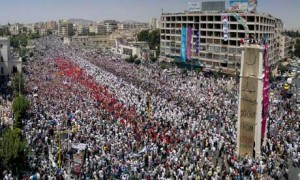 A common thing one hears from those skeptical of nonviolent civil resistance is that it would require a “charismatic leader” of some sort to really work—a Gandhi or a King, or the like. Of course the historical record hardly supports this; the assassinations of Gandhi and King spelled disaster for their movements, while less-centralized uprisings in places like Serbia and—this year–Tunisia and Egypt were startlingly successful. Still, this misconception seems to thrive.

In an extraordinary piece of reporting today at NPR, Deborah Amos describes what’s going on now in the already five-month-long effort to oust Syrian president Bashar al-Assad. There are no leaders, nor do the protesters want any:

The banners and the slogans are remarkably similar, from the city of Dera’a in the south, to Hama on the central plain, to the eastern desert town of Deir Ezzor. Even in the capital of Damascus, the chants are the same: “It’s time for President Bashar al-Assad to go.”

Yet there are no leaders directing the chants at these rallies. There is no national leadership, even behind the scenes, says Rami Nakhle, a spokesman for the Local Coordination Committees, the LCC, the most well known of the groups opposing the regime.

“Actually, we are doing our best not really to have leaders, because the classic leadership concept is really not working with this uprising,” said Nakhle, who is operating from Beirut in neighboring Lebanon.

On the one hand, they recognize that having specific leaders could make the movement more vulnerable. But there are other, more cultural reasons, too:

But there is something even stronger at work, said Nakhle. This Syrian generation has grown up under an authoritarian system and distrusts any kind of leadership.

“If some leader or some person starts to behave as a leader, the crowd will knock him down,” he said. “Everybody really feels anger towards leadership and authority on them.”

Yet Syrian resisters, Amos reports, also realize the downside of this approach. When it’s time to negotiate, who will represent them? When the international community wants someone to ally with, who will they choose? For the moment, as the situation remains violent and unpredictable, Syrians have little choice but to consign themselves to some uncertainty:

“There is an internal process, a process that is taking place in the street, which we will have to wait to see what happens there,” [human rights monitor Wissam Tarif] said. “No one can control that. The real show is taking place on the ground with the protesters. And they will decide. No one else.”