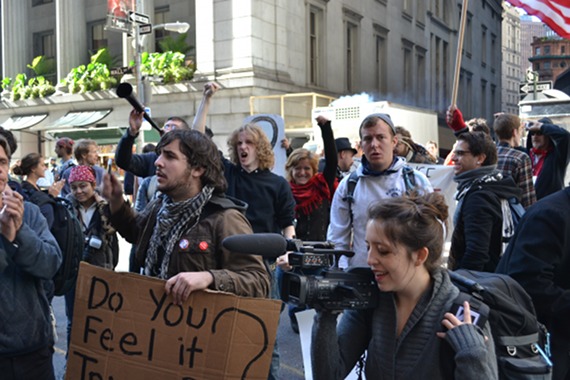 In the newly-renamed Liberty Plaza, the place that hundreds of protesters have come to call home for the last three days, nothing is quite predictable. At around 6:15 in the morning, those of us sleeping on the plaza’s hard, cold surface got the call to wake up, and someone called for a General Assembly meeting at 7. After people groggily packed up their bedding and lined up for dumpster-dived bagels, the meeting began. Its purpose was a run-down of the day’s events. Committees that were meeting the night before had decided to have marches to Wall Street at 9, 11:30, and 3:30. But then somebody came to the front and announced through the “people’s microphone”—those around him echoed one phrase at a time so others could hear—that he was heading off to march now. Wall Street bankers were walking to work as we were sitting there! He ran off and, immediately, one or two hundred others followed. They marched around the plaza, chanting “Occupy Wall Street! / All Day! All Week!” and then set off heading south on Broadway. The first weekday demonstration of the occupation had begun.

Upon arriving at Wall Street, they found that the blocks around the New York Stock Exchange, which had been barricaded completely throughout the weekend, now had open sidewalks. (The roadways themselves were still barricaded, allowing the police to move around easily.) After briefly massing at the entrance to the sidewalk, they proceeded down it, still chanting, and banging on the barricades, making a mighty noise. They were intermingled, inevitably, with those trying to get to work in that area and mainly clogged the way—which was the point. “We! Are! The 99 Percent!” they chanted. Speaking to the police, they’d sometimes replace “We” with “You.” 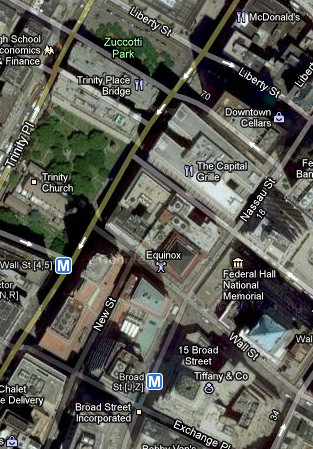 For almost two hours the march continued, continually evading attempts by the police to pin them in or guide them out of the area by making sudden turns and course reversals. Just as the barricades on Broad Street were opened to let them out and keep them out, they turned around and headed back up toward the Stock Exchange and along Wall Street. (This was when Democracy Now! called me for a report.) Then, after marching around the Exchange on all sides, the crowd turned into a long, two-directional picket line along Wall Street, going back and forth and back and forth as the opening bell was rung. “Ring! The! Bell!” they cried. With so many occupiers out, scouts made sure to check that there were still enough in Liberty Plaza to hold it.

Most bystanders and commuters in the midst of the march weren’t amused. (The goal wasn’t to amuse them.) “Shit” was something I heard a lot. A bitter dog-walker said to a security guard, “They say it’s their street”—Wall Street Is Our Street!—“but they don’t even pay taxes.” Along those lines, the “Get a job!” line was pretty common. So was ambivalence. “I hope the police protect the financial… bullshit.”

The most enthusiastic bystanders I talked with were those coming from other countries. A middle-aged woman from El Salvador with painted eyebrows and a coffee in her hand said, “We used to do this in my country in the ’70s and ’80s. They’d arrest all of us. In this country it’s different.” We can only hope. She took pictures of the police in charge and made sure I did too, just to have them on record.

When the “Let’s Go Home!” chant finally came at around quarter after nine, the march returned victoriously to Liberty Plaza and took stock. There were four arrests in the course of it, followed by several more as the day went on. But the protesters didn’t rest on any laurels. Within minutes of the marchers’ return, a meeting was convened to talk about how to do it better next time. After all, they’re not just here to march; they’re here to occupy, to discuss, to replace the country’s money-saturated politics with a leaderless and truly democratic process of their own.

Over the course of the day, media attention has intensified on the occupation. It was one thing to hang around a private park for the weekend. It’s another to stay into the work week and to disrupt the business of the Financial District with the intention of doing so more—all day, all week. The afternoon General Assembly is full of new faces, and sign-holders were facing off with a substantial line of police officers on the Broadway sidewalk. People passing by snap pictures of the vast spread of cardboard signs that is becoming Liberty’s Plaza’s new floor.

Another march set off around about an hour ago, and they’ve just returned to cheers and dancing.