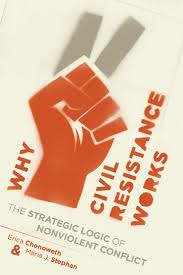 The nearly two-week-old occupation at Liberty Plaza near Wall Street has certainly captured people’s attention, especially after viral videos of a violent mass arrest on Saturday spread. The protesters have made their presence felt. But have they really shifted the power dynamic in the United States in any significant way?

At Guernica, editor Joel Whitney suggests that they might have, drawing on the new classic in the literature on nonviolent civil resistance, the work of WNV contributors Maria Stephan and Erica Chenoweth:

In their bruises, arrests, and panic attacks last weekend the protestors scored points the way scholars Maria Stephan and Erica Chenoweth insist nonviolent resistance always works. Namely, protestors contrasted their own nonviolence with the brash violence of the state to draw public sympathy. Although the Egyptian and Tunisian street revolutions happened after the period Chenoweth and Stephan look at in their study (1900 to 2006), they were largely nonviolent. According to the data those nonviolent “campaigns” were able to draw domestic and international support because the nonviolent nature of the protests contrasted so sharply with the thuggishness and lack of mandate of the leaders. At key moments internal desertions took place, as when police and military forces made clear signs they supported the protestors, and when outside governments and institutions previously supportive of the Egyptian and Tunisian regimes withdrew support.

The question of power is especially urgent now as, in their General Assembly, the protesters are currently discussing the question of demands—if in fact they choose to make any. They have to consider not only what they want but what they’re realistically in a position to actually get. At this point, many realize, probably not much. That’s why, more and more, protesters are coming to the way of thinking that the NYC General Assembly came to before the occupation actually began: that the direct democracy of the assembly and the occupation itself would be the demand, a living contradiction to the corruption at Wall Street and a base for future organizing against it, as well as presenting an image of the world which might replace it.

Most successful nonviolent movements, as Stephan and Chenoweth show, depend on their ability to marshal vast sections of the society to the cause. This still hasn’t happened yet for the Wall Street occupiers, whose numbers at Liberty Plaza are still in the hundreds at any given time (though, in total, they’re certainly several thousand). Then again, with similar occupations cropping up all around the country, most notably in Washington on October 6, that may quickly change.