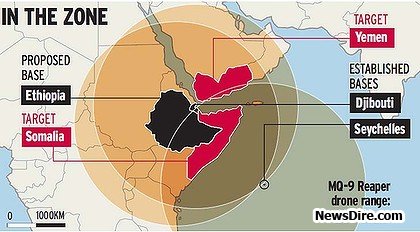 Nick Turse has published a revealing overview of the dramatic proliferation of US Unmanned Aerial Vehicles and Unmanned Aerial Systems entitled “Inside our drone base empire.” As Turse, a senior editor of Alternet.org, writes:

They increasingly dot the planet. There’s a facility outside Las Vegas where “pilots” work in climate-controlled trailers, another at a dusty camp in Africa formerly used by the French Foreign Legion, a third at a big air base in Afghanistan where Air Force personnel sit in front of multiple computer screens, and a fourth at an air base in the United Arab Emirates that almost no one talks about.

And that leaves at least 56 more such facilities to mention in an expanding American empire of unmanned drone bases being set up worldwide. Despite frequent news reports on the drone assassination campaign launched in support of America’s ever-widening undeclared wars and a spate of stories on drone bases in Africa and the Middle East, most of these facilities have remained unnoted, uncounted, and remarkably anonymous — until now.

Run by the military, the Central Intelligence Agency, and their proxies, these bases — some little more than desolate airstrips, others sophisticated command and control centers filled with computer screens and high-tech electronic equipment — are the backbone of a new American robotic way of war. They are also the latest development in a long-evolving saga of American power projection abroad — in this case, remote-controlled strikes anywhere on the planet with a minimal foreign “footprint” and little accountability. 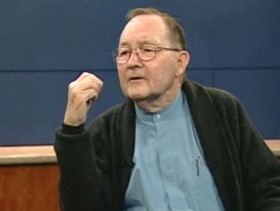 Turse’s reference to drones and their “base empire” got me thinking again about the late Chalmers Johnson, the Cold Warrior who found himself making a fundamental shift in his later years. In so doing, he helped pull back the curtain on what he termed the United States’ “base world.”

Turse’s depiction of the growing presence of drone bases is just another piece of the puzzle that Johnson, who died last November, spent the last years of his life documenting and sounding the alarm about.

I was a latecomer to Chalmers Johnson. It was not until I read John Dominic Crossan’s book, God and Empire that I learned about this academic and former CIA consultant who underwent a profound metamorphosis and who produced a series of remarkable books peeling back much that hides the truth about the imperial musculature of this country.

Johnson had served in the US military during the Korean War, authored numerous books, and rose through the ranks of academia to become a department chair at the University of California at Berkeley. He later founded the Japan Policy Research Institute. His awakening came after the USSR collapsed. He was stunned to see that, instead of demobilizing its forces, the US strengthened them, and has carried on with one war after another since then.

His intellectual honesty being what it was, he had to re-think everything.

The result was a trilogy that outlines how the US empire is not rooted in colonies but what he names a “base world”—in 2005, he documented 737 US bases around the planet that function to establish and maintain US military, political, and economic preeminence. (Since then, Nick Turse has documented that the US now likely possesses over 1,000 bases worldwide.)  Johnson is somber about the karma this entails—the equal and opposite reaction this base world sparks and the whirlwind it will reap.

Hence the weight and meaning of his three books: Blowback: The Costs and Consequences of American Empire; The Sorrows of Empire: Militarism, Secrecy, and the End of the Republic; and Nemesis: The Last Days of the American Republic.

There are many ways to “wage nonviolence.” Chalmers’ activism was rooted in his cogent and painstaking academic research, the results of which he not only published but promoted in numerous venues. He connected the dots of American empire and offered us a more clear understanding of the infrastructure of total dominance and its consequences.

This in itself was a profound act of nonviolent resistance and nonviolent change.

Such active analysis will be crucial to what I like to call the “nonviolent shift”—the long-term process of creating a culture of justice and peace using tools of nonviolent transformation. It is not the process of creating a utopia. Instead, it is a slow construction of an environment—a human “family system” —that entertains the nonviolent option as the default. Building such a culture entails political, sociological, psychological, and artistic work. But these must, in turn, be grounded in a deep spiritual transformation—what eco-philosopher Joanna Macy calls The Great Turning.

This is why I regard Chalmers Johnson’s work as a critical step in a required existential therapy of our time. It brings the reality with which we must contend into sharp focus.

For Gandhi, Johnson’s chilling analysis would lead, first, to the question: In what ways have I propped this up? What implicit or explicit consent? What is it inside that has helped keep this going? How are we supporting this? And how do we loosen those chains inside – so that we may remove the pillars of support that keep such a policy in place?

Chalmers Johnson’s legacy invite us to glimpse the Wizard of Oz behind the curtain. Then, in the spirit of Gandhi, it prompts us to explore all the ways we have consented to and supported this macabre charade. Finally, it calls us to act—to recognize that we are at the crossroads and to take action to renounce the lethal allure and accelerating momentum of empire.

This will be no simple thing. But the task is made just a bit easier by the kind of engaged research that Chalmers Johnson—and others like Nick Turse—have gifted us with.

May we have many more examples of this form of nonviolent action.

Renouncing the right to bear drones

Chalmers Johnson and the activism of research