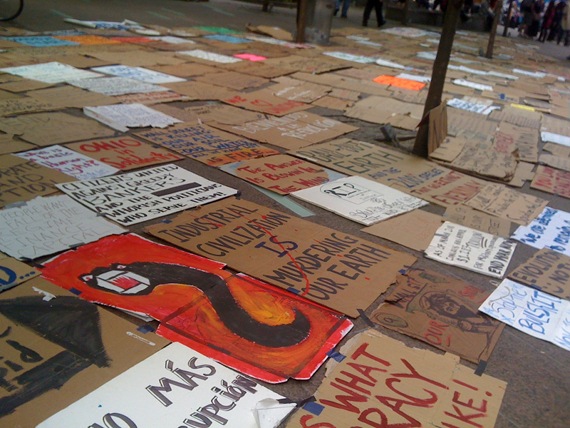 As the Occupy Wall Street (OWS) phenomenon grows, it has been expressing many truths, even while struggling to find a single over-arching message.  The search for captions, slogans, and themes that illuminate the changes sought is characteristic of civil resistance campaigns. This is not merely branding, but a way to sharpen the concrete results that can result from such a dramatic outpouring of human aspiration, emotion, energy, protest, and yearning. Some observers have grown impatient with the evolving messaging coming out of OWS, but, historically, slogans have often changed as a campaign proceeds.

In East Germany in 1989, with 13 consecutive Monday-night demonstrations in Leipzig from September 25 to December 18, the largest public assemblies in German history occurred. Surges of demonstrators carrying candles flowed from the Protestant churches of Leipzig and other cities, bidding the government to reform and liberalize. Five million East German citizens eventually participated in these candlelit marches, exerting immense political pressure that led to the crumbling of the communist regime. Throughout that autumn, as I have written elsewhere, the slogan-writers adapted their messages to reflect the changing popular sentiments. In November, chants went from “We want to leave” to “We are staying here.” Other calls asked for popular sovereignty: “We are the people!” (Wir sind das Volk). Eventually, as the hoped-for reunification of East and West Germany increasingly became a possibility, the painted signs proclaimed of the two Germanys, “We are one people!” (Wir sind ein Volk).

The United Democratic Front (UDF) was a South African umbrella organization in the broad anti-apartheid movement. Launched in 1983, it initially coordinated 565 affiliates comprised of religious groups, professional associations, student organizations, trade unions, and women’s and youth groups. It was strong because it was decentralized, yet it linked together networks of free-standing groups. Its slogan was “The UDF unites; apartheid divides.” At its peak 700 affiliates were under the UDF tent, embracing thousands of geographically dispersed organizations. Mass mobilization on the ground could emerge with relative independence from the internationally active African National Congress (ANC), as Kurt Schock’s Unarmed Insurrections: People Power Movements in Nondemocracies shows. In this way local leaders whose lives had been shaped by the daily repression of the townships became pivotal.

Each UDF affiliate (whether butchers, poets, teachers, traders, women and so on, on both the local and national levels) had its own grievances and sets of demands, which were almost unlimited. The trade union federation slogan was “An injury to one is an injury to all.” One student movement chose as its banner “Each one teach one.” In the early years, the nonviolent methods were often marches, demonstrations, rallies, and huge funerals. These actions often promoted particular local demands. Methods of noncooperation followed, such as boycotts. Rent and service boycotts brought about the collapse of state authority in many townships, as the work of Tom Lodge has documented. “[T]he UDF realized the strategic virtue of methods of nonviolent action,” Schock writes, “and understood that state power was more likely to be undermined through nonviolent action than through violence.” The noncooperation drives were effective, so much so that the government of South Africa imposed a partial state of emergency in 1985.

During the hot years, from 1985 onward, the slogan of the ANC was “Unity in action.” The cleverly embedded meaning was that everyone doesn’t have to agree on everything. This rubric encompassed particular objectives of various anti-apartheid groups, with their differing methods and goals, much as in Gandhi’s evocative phrase, “Unity in diversity.”

Eventually, the overarching slogan in South Africa became “The people shall govern.” The UDF importantly managed to achieve acceptance of the idea that the varying grievances of their affiliates, with their myriad organizational members, could finally only be resolved at the national governmental level. Hence “The people shall govern” was not a vacuous abstraction. It was a declaration that all of their particular problems could only be addressed by the national state.

In the Balkan country of Serbia in 1998, a group of students in Belgrade founded Otpor! (Resistance!) to work  for free and open elections. They arranged to bring 1 million demonstrators to Belgrade to confront the dictator Slobodan Milošević and started preparations to assure that Serbian security forces would disobey any order to fire upon those participating. In 1999 and 2000 in forty-two Serbian cities, Otpor trained more than 1,000 activists in nonviolent action as nationwide youth became drawn in to overthrowing Milošević. By the end of 2000, Otpor had 70,000 members in 130 branches, according to Roger Cohen:

Through marches and mockery, physical courage and mental agility, Otpor grew into the mass underground movement that stood at the disciplined core of the hidden revolution that really changed Serbia. No other opposition force was as unsettling to the regime or as critical to its overthrow. … Under cover of night, [its activists] were out spray-painting Otpor fists and election slogans—“Gotov Je” (“He’s Finished”) and “Vreme Je” (“It’s Time”).

Otpor’s slogan-writers found minimalist, indirect phrasing, but everyone grasped the messages. Steven Erlanger reported for the Times that, in pursuing their goal, Otpor provoked and mocked the regime’s authorities with regular “happenings” and witty slogans, such as “Bite the system.” On October 5, 2000, the Milošević regime collapsed as Otpor had planned: hundreds of thousands swamped Belgrade, some atop bulldozers and tractors, thronging roads with loaded buses, inundating government buildings, while police and the state security forces looked the other way.

As I see it, the issue for OWS is not “one demand,” as many have urged, but to make it possible to communicate with ingenuity and expressive potency the many grievances, needs, and perceived outrages that are encircled within the circumference of the overall campaign. It is also possible to go beyond protest and give guidance as to desired program and policy changes. This is not to betray the breath of the mobilization, but to prepare the way for tangible change.

OWS has made its point that the participants in the campaigns now spreading to distant U.S. cities represent the overwhelming number of people in the United States—“the 99 percent.” Still, it can sharpen its search for ways to define its movement with singular captions and embedded meanings.

Carol Costello said on CNN on October 7, 2011, that you need one charismatic leader who can speak for the movement. This is nonsense, especially for a movement so committed to direct democracy and decentralization. As related struggles, subsidiary fights, closely linked movements, and sub-movements continue to coalesce and spread across the country, involving more and more groups, teams can even more effectively develop the messaging and slogans that point toward actionable responses.

Remembering that successful movements in East Germany, South Africa, and Serbia saw their messages evolve and diverge should prompt us to have patience with the messaging from OWS. History suggests that not having “one demand” from the outset is no reason to consider this movement uncommonly disorganized, or irrelevant. Still, messages penetrate best when lucid and simple. Messaging aids recruitment, helps to expand constituencies, and signals to sympathizers how they can help. It can pitch grievances that need regulatory reforms. It can appeal to potential defectors within targeted institutions. Those of us involved in civil resistance have as one of our most important of tasks communicating with the people that we want to reach.

The search for a message

Bigger than the Jan. 6 insurrection, the 1971 antiwar mobilization known as Operation Dewey Canyon III altered the course of the war and uplifted the nation.

As Martin Luther King Jr. preached, we must reject peace that prioritizes calm over justice — and work toward building a positive peace instead.

Minnesota students walk out of school to protest racial injustice

Farmers are leading India’s biggest social movement in a generation