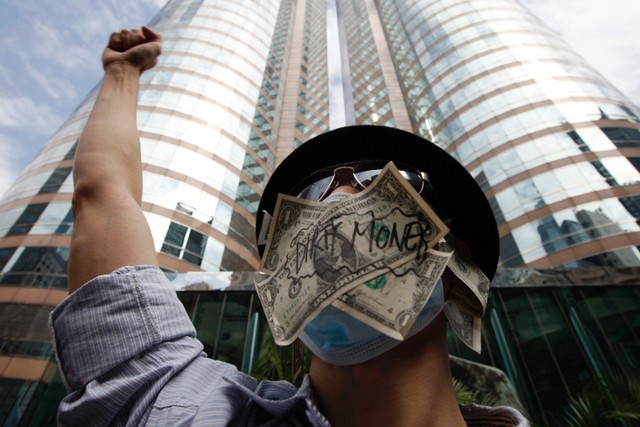 Today, people in cities from New York to Hong Kong—in both directions—are responding to the longstanding call from the Spainish Indignados for a day of protest against rampant corruption, austerity, and the power of high finance over and against the needs of the vast majority of people. The call has been strengthened, heartened, and echoed in recent weeks by the occupation movement in the United States that began at Occupy Wall Street, on top of this whole year of revolutionary activity, starting in Tunisia. The news is so far highlighting images of protesters damaging property—windows broken, cars on fire—even while briefly noting that, in the vast majority of cases, the protests are entirely peaceful. Typical.

The really important question, though, is whether and how this outburst of outrage will turn into meaningful change in the structures of power. Coordinated, worldwide protests have happened before in recent years—February of 2003, against the war in Iraq, or even 350.org’s mobilization against inaction on climate change in October of 2009. What can the movement do to turn this passion and momentum into a strategy that will really undermine the foundations of the corporate elite’s power? Protests on the streets can only be a beginning. What will it take to make this system cost more to maintain than to transform?

Will a day of protest become a day of change?