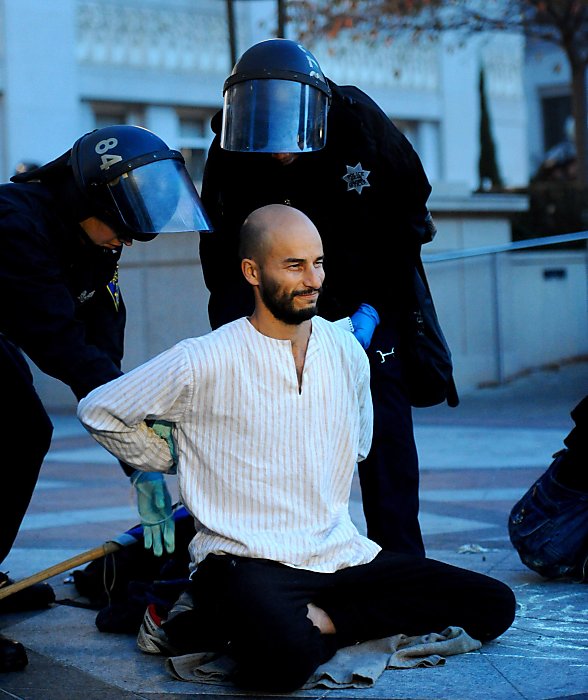 On Monday, a close friend of Waging Nonviolence, Francisco “Pancho” Ramos Stierle, was arrested while meditating at Oscar Grant Plaza during the early morning raid on Occupy Oakland. (Several moving photos of his arrest can be seen here.) As a petition on Change.org explains:

He is currently being held by the Oakland Police Department on $10,000 bail and they plan to turn him over to Immigration and Customs Enforcement (ICE) for immediate deportation. He could be sent to Arizona as soon as tommorrow morning. That means we need to act now!

Pancho is now at Santa Rita in Dublin, CA.  His arraignment for the civil disobedience charges has been fast tracked to Wed. 11/16/11 at 9:00 AM in Room 107 at the  WILEY W. MANUEL COURTHOUSE.  There is a possibility that he will  be transferred after this hearing to the custody of the immigration officials. Please attend this hearing and show your support for Pancho Ramos Stierle!!

Before he goes to court later this morning, please read and sign the petition to free Pancho, which can be found here. An email from Janine Schwab at the American Friends Service Committee says that you can also:

According to the petition, Congresswoman Barbara Lee can intervene and has the power to release Pancho.

Signing this petition or making these calls will only take a few minutes tops, and may be able to help keep a truly inspiring advocate and practitioner of nonviolence in the United States, so that he can continue his important work for social justice and peace—including his ongoing bold and creative effort to challenge gang violence in his Oakland neighborhood. As Venet writes on Facebook:

Pancho used his power of love to nonviolently stand against Arpaio’s immigrant sweeps in Arizona last summer and was faced with a similar situation.  We were successful in helping Pancho get out of that situation by using the power of collective intention.

Now we must muster whatever people power we have to defend Pancho once again and to challenge our unjust immigration policies.

UPDATE: Susan Koppelman has written on Facebook that Pancho’s arraignment was been postponed until 2pm PST, which means we now have roughly another 3 hours to spread the petition and call the congresspeople above. The How to Help tab at this link provides the most comprehensive list of things you can do, with many more ideas and phone numbers than I provided above.