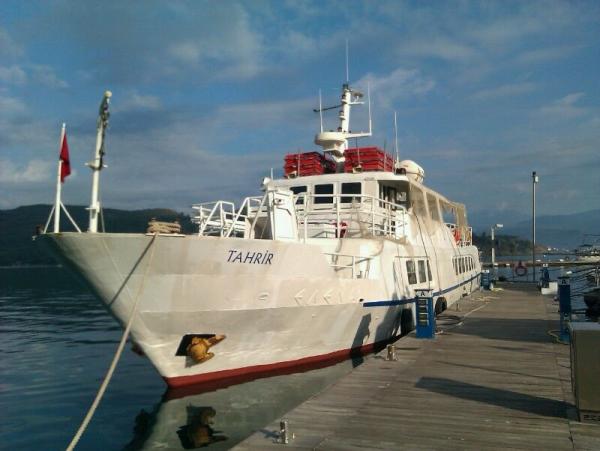 The latest wave of international Palestinian solidarity action is underway, as 27 people from five countries sail through international waters in the Mediterranean on their way to Gaza with an estimated $30,000 of humanitarian assistance. Departing from Turkey, the flotilla is comprised of two boats: The MV Saorise, whose passengers include delegates, parliamentary representatives and activists from Ireland, and the Tahrir, an international delegation comprised of solidarity workers and journalists hailing from Canada, USA, Australia and Palestine.

The Freedom Waves flotilla is the international community’s most recent effort aimed at penetrating the punishing and illegal naval blockade of Gaza, which has effectively imposed isolation, imprisonment and impoverishment upon the region and its people. According to Egyptian correspondent Hassan Ghani, tweeting from aboard the Tahrir, “Turkish coastguard was visible as #freedomwaves departed from Turkish shores, but did not approach, kept distance. Darkness now.”

To learn more about Freedom Waves, I contacted the Ramallah-based media office of the International Solidarity Movement (ISM). They responded to some of my questions by email earlier today:

Waging Nonviolence: What is your communications strategy?

International Solidarity Movement: Our strategy is to stay connected all the time, to be able to get live updates and post tweets continuously (unless Israel jams the communications signal, as has occurred in previous flotilla aid attempts.) We are currently attempting to stay connected via Skype with the boat.

WNV: What type of actions are taking place on the ground in the West Bank and Gaza in solidarity with the flotilla?

ISM: Demonstrations in solidarity with the flotilla are planned throughout the West Bank tomorrow including a parade on the streets of Ramallah during which Palestinian youth activists will carry a wooden effigy of the aid boats and also distribute arm bands printed with the phrase “Freedom Waves for Gaza”, in Arabic. Meanwhile, another group of students in Ramallah will be staging a demonstration outside of the United Nations building in order to demand that it ensure the safe arrival of the flotilla and to end its compliance with the blockade.

WNV: Why was it decided that the operation be launched covertly?

WNV: Israel is likely looking for any pretext, such as secrecy, that will legitimize a repressive response to the flotilla. Therefore, it’s important we understand the nonviolent nature of this mission. To what extent were the activists on board these ships trained in nonviolence?

ISM:  This is a nonviolent, human rights based mission. All passengers are required to abide by a code of conduct that will not bring the humanitarian effort into disrepute. Any resistance will be passive and defensive. Our aims are totally peaceful and all members of the flotilla have been instructed to offer no more than passive resistance to provocation and violence from Israeli armed forces. Most of the passengers were initially going this summer (when the boats were stopped by Israel) and then received a minimum of 2 days training in nonviolence that the organizers arranged; the ones who are new to the project received the same training before departures. Also most of them have a long history of nonviolence activism, some are even teaching it as well.

As Michael Coleman, an Australian activist aboard the Tahrir, told Jihan Hafiz of Democracy Now (also on the boat) in a pre-departure interview:

The aims of the flotilla are twofold. While we do have a small amount of aid on board—and that’s one of the goals, is to take aid to the besieged Strip—but the other is public awareness. And we’re well aware that the small amount of aid we have is tokenistic. It’s not going to prevent the suffering of 1.5 million people. Only governments and international institutions can do that. But we, as private citizens, can pressure governments and international institutions to do what is right.

In the meantime, we await the safe arrival of the flotilla which is expected to reach Gaza some time on Thursday (November 3).

How we can commemorate Boston

When do they shoot? The social origins of officers’ disobedience