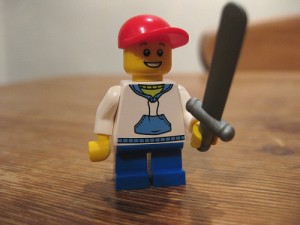 We had a big birthday bash for my step-daughter a few weeks ago. It was great: a big gaggle of kids, music, pancakes, a rainbow cake and lots of balloons. I appointed myself balloon maven and—armed with a how-to guide from the Klutz series and a hand pump—handed out wonderful balloon hats to the youngsters.

They were a hit. But I had not studied my guide very carefully, and once they started clamoring for dog and cat and dragon balloon animals, I was deeply out of my element.

“A wand, what about a magic wand?” I improvised with the first little boy who asked for a dog balloon. I whipped it up quick and handed it to him with a Harry Potteresque flourish. “There, now you can do magic.”

“Cool,” he replied, “a sword!” and he dashed off to engage his little brother.

Soon all the kids were crowded around my knees demanding (politely) swords in all the colors of the rainbows. “I will make you a magic wand,” I insisted to each, manipulating the top of the long balloons into fanciful wand like shapes. “Okay, but I am going to turn it into a sword,” they said again and again, undoing my handiwork at the top of the wands and swashbuckling their ways across the church hall. It went on like this all morning. The only child I could get to request a magic wand was my very own Rosena, and even she used it like a sword the minute it was in her little hands.

My brother and sister and I grew up in a pacifist anti-nuclear community, conversant in the dark corners of Mutual Assured Destruction and nuclear winters from an early age. Living with so many different people over the years, we were exposed to all sorts of ways that good hearted, radical, thoughtful people interact with children.

At nightly prayer there were a number of women who insisted on saying “awoman,” instead of “amen.” I was so influenced by this that I took to calling mayonnaise “womanaise.”

At dinner, we were exposed to your garden variety vegetarians and vegans (and a lot of lectures about same), but also raw foodists, people who only drank juice and those who weighed all their portions. We also sat down with people who used kelp instead of salt and who railed against white sugar as though it were a tool of Satan himself (or herself?). Everyone took turns cooking, and we’d watch our dad carefully. If he got out the peanut butter at dinner it meant that he did not like what was being served—he would never say anything—and we could eat just peanut butter sandwiches too.

A lesbian woman who lived with us taught us to say “directly forward” when we were giving directions, instead of “straight.” Her point was that the dominant (male) culture prioritized straight over other directions and made us think that straight was the only way to live. I think that was her point, anyway. Whatever it was, it must have worked, because our sister is a lesbian. (Ha.)

By way of contrast, our own parents—as a former nun and priest and often at least a decade older than other community members—were fairly conventional (strange to say) in their child-rearing techniques. Please, thank you, eating all one’s dinner so as not to thumb one’s first-world chubby nose at the starving children of Africa, may I please be excused, long lectures about one’s behavior (differentiated from other kids’ long lectures only by the frequent, learned, biblical references and occasional diatribe against morally corrupted American consumer culture), occasional spankings.

You get the picture. They were kind of normal—at least compared to the other people we lived with, and if you set aside the whole protesting and getting arrested and going to jail and talking about one’s faith all the time stuff. They ate meat, drank alcohol (though it was seldom on hand at home), enjoyed classical music, cursed with passion and imagination when provoked, and enjoyed detective novels.

We were not allowed to watch TV (morally corrupted American consumer culture). The worst thing we could do was fight with one another (which my brother and I did constantly; a peace accord was signed in high school). The second-worst thing we could do was lie, which my brother and I did all the time to cover up for our TV-sneaking and our fighting.

I learned a lot from the people I shared the dining room table with growing up—but less about healthy eating than about obsession and fixation and control. I learned to work around my parents’ prohibitions on TV and gorged myself on it when I could. (To this day, if a TV is on in a room, I can’t not watch it.) I learned to lie to be able to do what I wanted and still be an appropriate peace activist kid. I’m not proud of learning all of that. I don’t like it… but I did it.

Disclaimer Needed, though: Food obsessions and lying is not all I learned from my parents and all those other good folks. My point is that the lessons adults want to impart are not always what is learned by the kid.

I have been thinking about all of this because now I live with a five-year-old wonder half of every week. Does it really matter if she plays with magic wands or swords? Why do I want her to call it a wand when she wields it like a sword? If she is having fun and not hurting anyone, does my politically-correct overlay do anyone any good? Or is it just a semantic absurdism like womanaise?

What do we teach children by our words and actions? What do we want children to learn? What happens when what we teach and what they learn are not the same thing?  How can I be a parent who is learning right alongside this marvelous five-year-old rather than imposing my vision of the world on her little shoulders? How can I be a parent who makes the world safe, beautiful and governed by some logic (while still being honest about its morass of problems and our responsibility for all of that) for the tiny four-month-old being growing inside of me?

Children are little insurrections. They turn our lives upside down and they insist we see it through their eyes—and they care more than anything about fairness and friendship. Maybe we have more to learn than to teach.

Chicago’s South Side rises up against gun violence

From marching in the streets to forming human walls of protection around protesters, veterans are playing a quiet but important role in demanding racial justice.

If we don’t have an unwavering commitment to healing as we mobilize this election season, we will always be in crisis.

Beautiful Trouble’s guide to winning the numbers game, defending democracy and challenging business as usual to build the future we deserve.

The birth of an extraordinary progressive movement

If elected, Biden will have to fix things — because we will make him

Indonesia is in the middle of a new protest wave