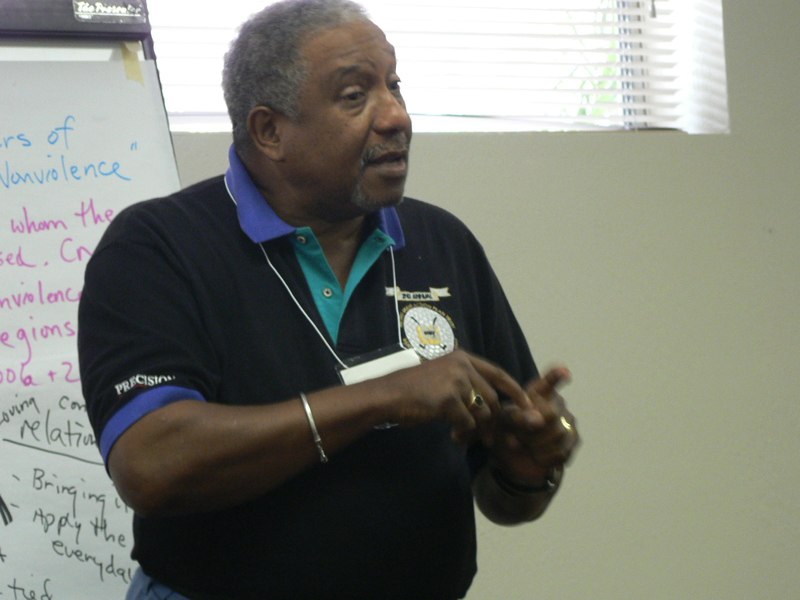 Mary Elizabeth King’s bracing account of Martin Luther King, Jr.’s nonviolence education published on this site is a vivid reminder that acquiring the vision and tools of nonviolent change does not happen by magic. As she stresses, “these methods are neither intuitive nor spontaneous; they’re a system of logic, skills and techniques that must be learned.” Like other skills, they require study, reading, practice, and mentors who know the ropes and who can model what strategies for nonviolent action look like.

Now more than ever, each one of us is called to play a role in the local and global movements emerging to grapple with the monumental challenges facing our communities and our societies. This participation will require commitment and courage, but also training, preparation, and rigorous education for nonviolent change.

Fortunately, we have many options.

The great nonviolence mentors and trainers of the U.S. Civil Rights movement—including James Lawson, Bayard Rustin, Glenn Smiley and Ella Baker—founded a tradition of nonviolence training that has proliferated over the past half century. Numerous movements over these decades have utilized systematic training to prepare people for action; to disseminate models for successful movement building; to cultivate community and solidarity; to strengthen the potential for participatory democracy; and to build the infrastructure of nonviolent people power.

While these programs have often been geared to achieving narrowly defined objectives, in many cases they ultimately draw their power from the psychologically seismic process of rocking a mind-set deeply rooted in the ancient paradigm of violence. Nonviolence training, however cursory or lengthy, cracks open the possibility of an alternative to passivity and violence and thus invites us to become innovative “artisans of a new humanity,” as the theologian Juan Luis Segundo puts it.

Today numerous organizations offer rich resources for this training. Here are a few of the many that exist.

There are many university-based training programs now, including the Kroc Institute for International Peace Studies at Notre Dame—where John Paul Lederach, a pioneer in conflict transformation and peacebuilding who trains people around the world, teaches—and the Center for Peacemaking at Marquette University, which trains students and teachers in Milwaukee schools. TRANSCEND Online Peace University provides distant learning opportunities.

The Metta Center for Nonviolence offers spiritually grounded training for the engaged nonviolent life, as does the organization I work with, Pace e Bene Nonviolence Service. There are also many great freelance trainers, including long-time activist and author Starhawk.

Thirty years ago this March I experienced my first full-length nonviolence training when I was in graduate school. At the time there was a groundswell of nonviolent action focused on closing or converting Lawrence Livermore National Laboratory, a top-secret nuclear weapons lab that had designed 50 percent of the U.S. atomic arsenal. At the time I was working at the Center for Ethics and Social Policy and had started a project studying the economic, political, psychological, physiological and environmental consequences of the arms race with the USSR, which was going full bore at the time. Although I had not started out terribly political, I was becoming increasingly convinced that this weapons build-up had to end. Nevertheless, I did not consider myself an activist and did not seriously see myself doing anything so rash as engaging in civil disobedience. I heard about the Saturday training and decided to check it out, but I definitely did not go with the idea of taking action the following Monday morning.

I found the training organized and clear. A welcoming and safe space was created by the training team, which, I remember to this day, included Pamela Osgood, Darla Rucker, Bruce Turner, Pat Runo, and Terry Messman. There was a logic to the workshop, which included eliciting the group’s knowledge about the history, principles, and dynamics of nonviolence; reflecting on our hopes and fears when considering action; receiving a healthy dose of information about the likely legal process and jail time; and then engaging in a full-on civil disobedience role-play, which we debrief and analyzed in depth.

At one point we broke into small groups to reflect on how nonviolence works. Terry Messman was part of this group and I was deeply impressed with his knowledge but, even more, his passion. He had spent six-months in federal prison for engaging in nonviolent action at the Trident submarine base in Bangor, Washington, and it was clear that this experience, rather than breaking his spirit, had emboldened it. Halfway through the training I surprised myself by deciding to join the others on Monday in blocking the South Gate of the laboratory.

This proved to be my baptism into a conscious path of nonviolence and nonviolent action. Thirty of us netted a week in the county jail, which became a personally transformative experience. Then and there I joined a newly formed Spirit Affinity Group with Terry and several of the others from the training and spent the next couple of years highly engaged in nonviolent resistance. I also started co-leading nonviolence trainings, which, in addition to helping to build a network of advocates prepared for action working for a nuclear-free future (and later, an end to U.S. war in Central America), also deepened my own understanding of the dynamics of nonviolent change. I came to value nonviolence training primarily because it offers participants a chance to reflect on critical issues and on opportunities to make a choice about how to respond to them.

Since then, I have continued to be involved in this particular form of skill building for a more just, peaceful and democratic society. For example, over the past couple of weeks I have facilitated or co-facilitated three nonviolence workshops in Chicago, where I now live. The first was for a church group that has been providing meals to homeless people and now wanted to explore how to tackle the systems that helped create homelessness in the first place. The second was for activists preparing for nonviolent direct action to protest policies of torture on the tenth anniversary of the establishment of the prison at the U.S. Naval Base at Guantanamo Bay, Cuba. And the third was for a group of students at DePaul University who are training to become presenters on the power of nonviolence in classes and student groups across the university. In each case I noticed enthusiasm building throughout the process, and a palpable sense that we were all discovering tools and a sense of connection and possibility that would strengthen our capacity to make a difference.

A plethora of nonviolence training models and organizations are available for our growth and maturity as agents of nonviolent change. The tradition that James Lawson and others jump-started is alive and well. Together we can take advantage of these rich resources to be increasingly ready—at a moment’s notice—to put our transformative power into action.

Will the People’s Climate March be this generation’s March on Washington?

A new book called “The Art of Activism” provides a deep dive on the process, principles, history and practice of artistic activism.

Learning to attune to the cycles of our own leadership can help us know when to do the right thing at the right time.

How three-quarters of French Jews survived the Holocaust, despite the Vichy regime

Students are walking out over COVID

Was Dorothy Day too left-wing to be a Catholic saint?