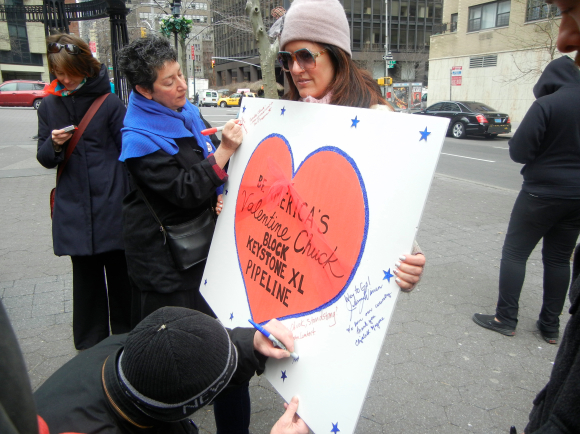 That’s what Zack Malitz said, looking rather bewildered, when he got off the phone with New York Senator Chuck Schumer’s office earlier today. The crowd of no more than a hundred activists gathered behind him in Dag Hammarskjold Plaza—just blocks away from Schumer’s office—did not yet know the news. But it seems their plan to march to his office and demand that he work to block an amendment to the Senate’s transportation bill forcing approval of the Keystone XL pipeline, which would run from Canada’s tar sands to the Gulf of Mexico, scared the senator straight.

After slapping high fives with a few of his fellow organizers, Malitz turned to the crowd and announced the good news in proper “people’s mic” fashion.

I just got off the phone with a representative from Chuck Schumer’s office… The senator is currently working with Harry Reid to put together a coalition to defeat the legislation the Republicans have attached the pipeline to. He told me that the senator stands with President Obama. We won!

The cheers gave way to an announcement that the protest had just turned into a “thank you” rally and people started signing a poster-sized Valentine for their new favorite New York Senator. At least one person questioned the rush toward optimism, asking the group, “Don’t we still have to protest against the pipeline? Is Schumer really the one who determines if this thing gets passed?”

The question of whether to celebrate has come up a lot for tar sands campaigners. And perhaps it’s a sign of their effectiveness thus far. As one organizer noted today, “This is our third victory.” The other two came when Obama effectively rejected the pipeline—first in November, when he announced that he would not make a decision on it until 2013, and again in January, when he said no to big oil and their allies in Congress after they pushed through legislation forcing him to decide within 60 days.

Nevertheless, the president did not name the specific environmental and societal threats posed by the pipeline—and raised by the activists—as his reason for postponing it, which has made these victories somewhat precarious. And that may be part of the reason for the push against outright celebration. But if there is any question as to whether the campaign has softened since its inaugural two weeks of civil disobedience in front of the White House last summer, one need have only seen the phone numbers scrawled in marker on Malitz’s left forearm to know otherwise—his jail-support contacts. Had Schumer’s office not called, Malitz and others were prepared to stand outside his office until the senator listened or had them carted away in a paddy wagon.

Instead, a staffer came down and greeted the protest, graciously accepting their valentine. The relative ease and success of the protest seemed to surprise everyone. Last week, when news broke that the Senate might vote to push the amendment through as soon as noon today, organizers were scrambling to pull something together. In just the last two days, Malitz and other tar sands activists in New York organized the protest targeting Schumer, while Tar Sands Action—which is now officially a campaign of 350.org—initiated an email blitz on the Senate. With the help of MoveOn.org and CREDO Action, they managed to generate more than 700,000 messages and get top spokesperson Bill McKibben to appear on The Colbert Report last night.

So, as much as today’s victory in New York is about showing the campaign’s ability to pressure key senators into supporting their cause, it’s equally about their ability to mobilize a growing base of supporters in a pinch. Unfortunately, that may be something they need to do on a regular basis. As Julia Walsh with Frack Action (a group that has also worked in concert with Tar Sands Action), told the crowd before it dispersed, “No victory is final. We have a long road ahead.”