Just about in time for Occupy Wall Street’s half-birthday last month, there was what might ostensibly seem to be a fitting reason to celebrate: Goldman Sachs executive Greg Smith quit his job and, to massive fanfare, penned a New York Times op-ed denouncing what his company has become. With those 1,300 words, Goldman’s stock price dropped 3.4 percent, vanishing more than $2 billion from its worth and necessitating a commiserative house call from the mayor of New York.

The trouble is, Smith didn’t really echo any of the Occupy movement’s concerns. There was no mention of the company’s habit of self-serving market manipulation, contributing to downturns from the Great Depression to the Great Recession, or its present hijacking of the very political system tasked with regulating it. The word “bailout” does not appear. What really seemed to disturb Smith, rather, was that this institution was putting its own interests before those of its obscenely wealthy clients. (He had personally worked with “two of the largest hedge funds on the planet, five of the largest asset managers in the United States, and three of the most prominent sovereign wealth funds in the Middle East and Asia.”) The company from which he’d once learned that obscenely wealthy clients come first was betraying that solemn trust so as to enrich its obscenely wealthy self. This was unconscionable, in Smith’s view, so he decided to give his longtime employer a big kick in the shins — all, it seems, in the service of a hope that Goldman Sachs might once again defraud the universe in a more gentlemanly fashion.

As Occupy-six-months-on has become the subject of dutiful retrospectives, the thought of Smith’s article keeps weighing on me as a big reminder of what the movement might seek to undertake, should there be the wherewithal to do so. Historically, the climax of just about every story of effective civil resistance is the moment of defection — when some crucial segment of the old guard goes turncoat and throws down with the voice of the people: Soldiers refuse to fire, prisoners go free, politicians ditch the party line. For Occupy in particular, imagine cops putting down their clubs, Bank of America breaking itself up, or senators giving back their corporate-given cash. So, what does it take to make this happen? When do people make that about-face, and write that damning op-ed?

It’s fortuitous, while we’re asking these questions, that Eyal Press’s new book, Beautiful Souls, has recently appeared to tell us a bit about just that. This study of “saying no, breaking ranks, and heeding the voice of conscience in dark times” relates the stories of several ordinary heroes who, from World War II to the present day, have turned into defectors of various sorts, often with repercussions that reached far beyond themselves. 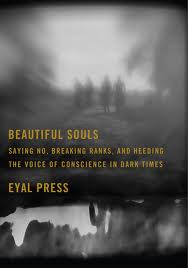 One upshot of the book, which was highlighted in a recent public conversation at New York University between Press and the Open Society Foundations’ Aryeh Neier, is that the voice these defectors tended to be heeding was not a distant abstraction or a universal truth, or even a jolt of compassion. Banally enough, actually, it was often a matter of simply wanting to live up to the very standards espoused by the institutions from which these people ended up dissenting. An elite soldier in the Israeli Defense Forces always thought he was part of “the most moral army in the world” — until he saw firsthand its treatment of innocent Palestinians. A Salvadorean immigrant believes that the U.S. financial-services industry in which she has excelled rests on a bedrock of fair regulation and honest governance — until she asks too many questions about a shady offshore bank and is fired.

These are people who had spent years in their institutions, who’d hedged their livelihoods and their personal integrity on the values by which these institutions supposedly operate. They believe, perhaps with reason, that those values have merit, and they had lots of practice making everyday decisions with those values in mind. Hearing their institutions denounced outright, therefore — say, by protesters marching on the sidewalk outside their office — doesn’t tend to swing these “true believers,” as Press calls such people, because the values at the heart of their institutions seem so right. Greg Smith, whose utter devotion to Goldman Sachs’ supposed core values is the premise of his denouncement, is as true a believer as they come. And it is precisely these kinds of people, Beautiful Souls suggests, who can end up being the most likely and effective whistleblowers and the most crippling defectors, the instant they’re forced to realize that their institution fails to live up to its own cherished values.

Think about it for a moment, and this actually stands to reason. Of course we would be more likely to make sacrifices on behalf of values to which we’ve already committed our lives or careers, the values that our clients and subsidiaries and loved ones have been hearing us espouse for years on end.

Saul Alinsky noticed this phenomenon as well. He wrote, in his Rules for Radicals:

Since the Haves publicly pose as the custodians of responsibility, morality, law, and justice (which are frequently strangers to each other), they can be constantly pushed to live up to their own book of morality and regulations. No organization, including organized religion, can live up to the letter of its own book. You can club them to death with their “book” of rules and regulations.

Zoom back, then, to Occupy. The movement’s usual mode of attack against corporations or police departments it doesn’t like is to shout slogans about how bad they are. “Fuck Monsanto” and “fuck the police” are particularly popular refrains in New York lately. One could argue that Greg Smith reminds us that there’s a better — and perhaps more nonviolent — way: If you want to get an institution to eat itself alive, don’t just denounce it altogether. Instead, find ways to make its most committed and loyal members consider whether the institution really lives up to its own cherished values, and let them do their thing. They’re the ones who can stir up far more trouble with far less effort than anyone on the outside ever could.

Then again, despite eliciting far less buzz in the mainstream media or sympathy from Mayor Bloomberg, the Occupy movement’s West Coast Port Shutdown on December 12 of last year, which targeted properties owned by Goldman Sachs, hit the company’s stock price almost twice as hard as Greg Smith’s op-ed. That kind of approach also has an appealing honesty. When a company’s cherished values really are intolerable — in Goldman’s case, protecting the wealth of the 1 percent — perhaps there’s no substitute for simply going into the streets and shutting it down.

A lesson in defection from Goldman Sachs