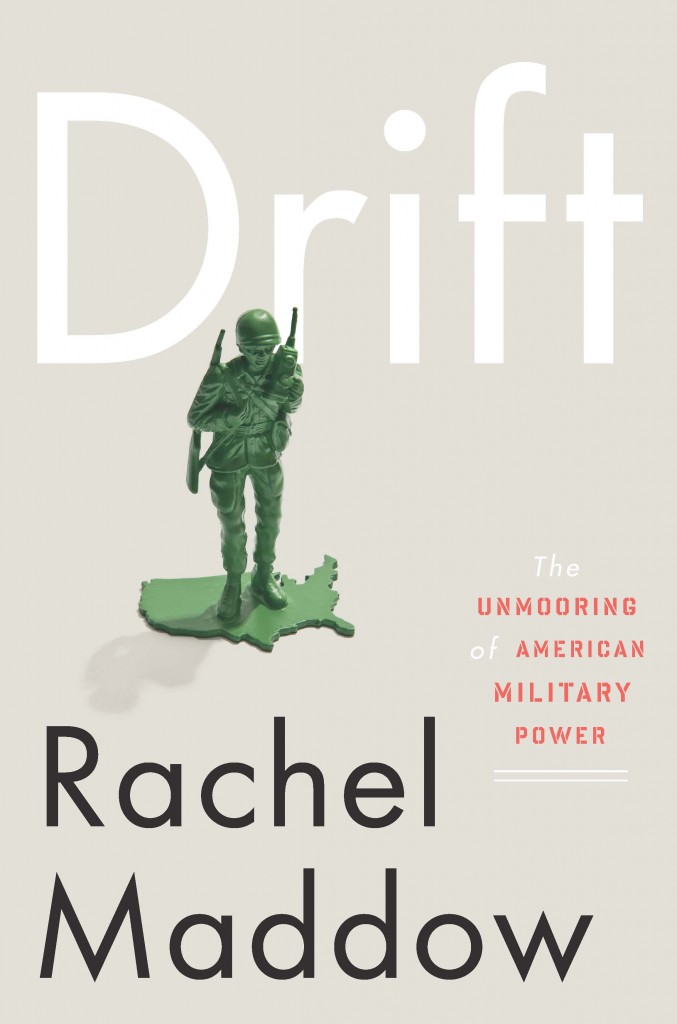 I don’t have a TV. But I am always being exhorted to watch The Rachel Maddow Show.

One of the reasons I don’t have a TV is that if I had one, I wouldn’t be watching high-minded, informative news shows like hers. I would be completely hypnotized by the worst of the worst; eye candy dregs like CSI: Miami, The Mentalist, the new Hawaii Five-0 and Two Broke Girls (which I have yet to see).

Let my fixation be a cautionary tale to all the well-meaning parents out there wanting to shield their children from the corrosive effects of overexposure to TV: outlaw TV, and they will be forever in its sway. Let them watch it, and it will make them discerning consumers.

I can still read, though. For my birthday a friend gave me Maddow’s new book: Drift: The Unmooring of American Military Power. My eighth celebration of year 30 was only a few weeks ago, but I have already chewed through this hard-hitting, spirited and lucid book.

Maddow is already a household name, with a trademarked wit, a loyal following and a large bully-pulpit. She is also endowed with the intellectual fortitude and homespun wisdom to pull out a new take on one of our most important and least interesting topics — militarism. And it seems to be working. This week, Drift is number 12 of Amazon’s Top 100 — right above the newest Stephen King fantasy and below Marlene Koch’s cook book urging obese Americans to Eat More of What You Love (in low sugar, fat, calorie form). That juxtaposition is worth its own blog post, but I digress.

Maddow is no pacifist. In fact, she told Fresh Air’s Terry Gross that many of her family members have been in the military, and that “had it been legal for openly gay people to serve in the military in the time I might have been considering signing up. I think service is honorable, and that was always inculcated in me.” But her commitment to service does not keep her from being critical (in a way that is both detailed and conversational) about the overreaches of the military — from the nuclear weapons complex, which she calls “an $8 trillion fungus among us,” to the corrosive role of secrecy. “[I]f we are going to use drones to vaporize people in Pakistan, Yemen and Somalia, the Air Force should operate the drones, and pull the trigger. And we should know about it,” she writes. “The chain of command should never be obscured by state secrets.”

The book traces how the United States lost touch with the Founders’ ideals about the role of military power and force in a democracy. She begins her opening chapter (“G.I. Joe, Ho Chi Minh and the American Art of Fighting About Fighting”) by describing Thomas Jefferson’s concerns about standing armies: “never keep an unnecessary soldier … not for a standing army in a time of peace.” This chapter is a 19-page survey of two centuries of American militarism that brings us from that Jeffersonian ideal through the last days of the Vietnam War, when “the questions of how we provide for the common defense, how we apportion our limited resources to the military, how we prepare for war, and whether or not we go to war were back where they belonged, out in the open, subject to loud and jangly public debate.”

And then in a series of chapters tackling the U.S. invasion of Grenada (remember that!), the U.S.-financed Contra proxy war in Nicaragua and other military misadventures of the 1970s, 80s and 90s, Maddow demonstrates how that debate went underground again, bringing us to the situation of the last decade where the United States is neck deep in a multi-front war costing trillions of dollars and involving millions of people, but where “half the American public says it has not been even marginally affected.” She harkens back to the founders, who, she says “chafed at the idea of an American standing army” to “disincline us toward war as a general matter. Their greatest advice was that we should structure ourselves as a country in a way that deliberately raised the price of admission to any war … for us to feel — uncomfortably — every second we were at war.” Now, she writes “war making has become almost an autonomous function of the American state. It never stops.”

And this is where it gets a little tricky, because Maddow is at pains to say that this is not anyone’s fault. No one made that happen. Not even all the elements that benefit richly from this system.

The name of the book is Drift not Grift or Rift of Sift. “[W]e’ve drifted off that historical course,” she writes in the introduction about the checks government is supposed to place on military power, “the steering’s gone wobbly, the brakes have failed. It’s not a conspiracy, there aren’t rogue elements pushing us to subvert our national interests to serve theirs.”

This assertion makes her book a lot more accessible and a lot more engaging. It allows her to get into the nitty-gritty without having to build a criminal court case against the Lockheed Martins and Halliburtons and the very lucrative and effective revolving door between military contractors and the Pentagon, Armed Forces and Congress. Maybe these are all tired points anyway. They have been made so many times that they become a sort of short hand — Ike’s MIC is alive and well. (In President Dwight D. Eisenhower’s 1961 farewell address he warned of the “unwarranted influence” of the “military industrial complex,” which has created the “potential for the disastrous rise of misplaced power…”) This does not put you between a diet cook book and a Stephen King novel on Amazon’s best seller list.

Not painting a picture of the back rooms where cigar smoke swirls and billion dollar deals get made allows Maddow to offer a fresh perspective that is motivating and empowering. It makes items on the to-do list at the end of the book seem almost doable, like:

“Let’s quit asking the military to do things best left to our State Department, or the Peace Corps or FEMA…

The list goes on and it makes sense. Let’s DO IT!

Did it happen yet? No? Why not?

If it is all so commonsensical, why isn’t it happening? Was it just drift that led to each of these areas (and so many others) getting out of whack? Did it just happen the way the grass grows wild at her local water system? Does anyone or any entity benefit from the militarization of foreign aid? Who reaps the rewards when military functions are privatized? Did anyone push for the doubling of funds for the nuclear weapons complex at a time when President Barack Obama is publicly committed to seeking “a world free of nuclear weapons”?

There are forces at work. They are not rogue elements. They are not in back rooms. They conspire in plain sight, and they rely on the fact that we are too busy watching the dimples crease Simon Baker’s handsome face in The Mentalist to pay attention to the ways in which they are bankrupting our country and undermining our democracy.

Eisenhower urged that “only an alert and knowledgeable citizenry can compel the proper meshing of the huge industrial and military machinery of defense with our peaceful methods and goals, so that security and liberty may prosper together.”

Rachel Maddow’s book makes us all a bit more alert and knowledgeable and ready for the challenge.

She dedicated Drift to Dick Cheney, begging “oh, please let me interview you.” Maybe now that the former vice president has a new heart, he will say yes.

Trapped inside the military the day Milosevic fell