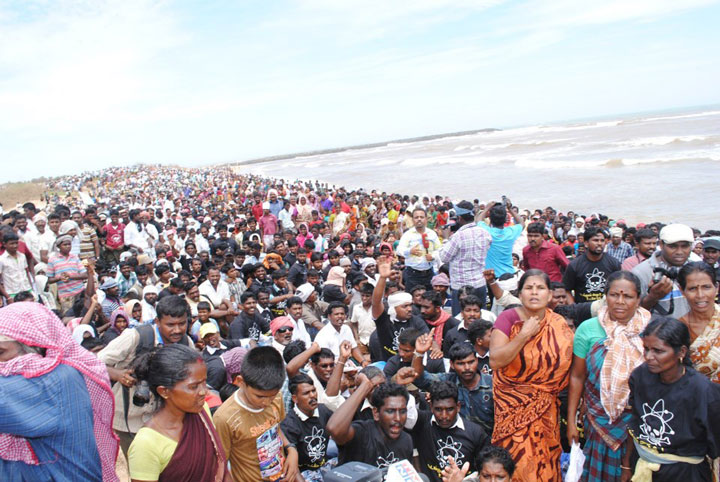 Hundreds of people have been arrested, dozens remain in custody and three deaths have been reported as protests against the start-up of the nuclear power plant at Kudankulam, India, reached a crisis point this week. The government’s announcement that it would start loading nuclear fuel into one of the two Russian-built reactors beginning September 11 sparked a new round of mass resistance from villagers living along the coast of Tamil Nadu state at the southern tip of India.

An estimated 30,000 people rallied in the village of Idinthakarai over the weekend of September 8–9. Seven thousand police were positioned on the roads nearby to quell protests like those that have so far prevented bringing the reactor online. The People’s Movement Against Nuclear Energy (PMANE), led by S.P. Udayakumar, initiated a yearlong series of mass fasts and nonviolent demonstrations by farmers and fishermen who live and work in the shadow of the reactor. For several months last winter, area residents blocked roads and prevented construction workers from reaching the plant. Police have filed 55,000 First Information Reports, the first step for criminal prosecution, while 6,918 people face charges of sedition under a much-criticized section of Indian law.

In the wake of the Fukushima catastrophe, popular opposition to the Kudankulam project has grown ever larger, including from opposition political parties and some who are not committed to the nonviolent discipline observed by the PMANE protesters.

On Sunday, instead of confronting the police on the roads, some 8,000 people began walking down the beach towards the seaside nuclear plant just two miles away, with women and children at the front. Others took to sea in their fishing boats to surround the plant. Police were not prepared for the human wave, which stopped just a few hundred meters outside the perimeter wall of the reactor site. The force was redeployed onto the beach but the demonstrators refused orders to retreat, and thousands slept on the beach in inclement weather.

The next day, while most of the people returned home to freshen up, police in riot gear stormed the beach. Some of the hundreds of protesters remaining there threw sticks and stones. Police responded with a fusillade of tear gas and a lathi-charge — a military tactical melee marked by swinging the six-foot long bamboo lathi, or clubs, to disperse a crowd. Many demonstrators, trapped between lines of police and the ocean, sought refuge by wading up to their necks in the sea.

Back in Idinthakarai, police busied themselves going door to door, harassing and threatening residents while searching for PMANE leaders, including Udayakumar. At Our Lady of Lourdes Catholic church, where many nuclear protests begin, counter-protesters — aided by police, some say — tore down the anti-nuclear banner, rampaged through the sanctuary, smashed a statue of the Virgin Mary and urinated on the wreckage wrought. The local priest reported that police had thrown mud and sand into the food that women were preparing for the protesters.

While Catholic officials condemned the “brutal and unjustified” police response, others suggested that the desecration was a purposeful assault on the minority Catholic faithful who make up a majority of the anti-nuclear movement in the vicinity of the plant.

Tragically, the protests and violent police response were not limited to the handful of villages near the plant. Fishermen led demonstrations in towns in neighboring districts along the coast. In Tuticorin, about 50 miles from Kudankulam, hundreds of people blocked train tracks and a highway for hours on Monday. When a police outpost near there was set ablaze and the demonstrators kept marching towards the station, police opened fire, killing a 48-year-old fisherman, G. Antony John. A 6-year-old girl was also reportedly killed when crushed by a crowd retreating from police attack.

Another group of demonstrators in Tuticorin forcibly took four police into custody for the day, releasing them that evening.

Responding to the violence, about 50 PMANE activists began a 48-hour fast at the church in Idinthakarai, where tens of thousands of demonstrators remained with limited food and water, due to police blockades on many area roads. Fishermen formed committees to work with youth on maintaining nonviolent discipline. “We have decided to continue the protest without resorting to violence. We will stay put in Idinthakarai. We will not oppose or attack the police personnel,” one youth told the Times of India.

On Tuesday, September 11, a massive rally in support of the Kudankulam resistance in Chennai, 500 miles away, blocked traffic for over an hour. At least 150 people were arrested. Across the region, police reported 1,050 arrests of anti-nuclear demonstrators, including about 750 activists of the MDMK, a Tamil Nadu political party.

In Idinthakarai, PMANE leaders Udayakumar, M. Pushparayan and Rev. Fr. M.P. Jesuraj announced that they would turn themselves in that evening to face accusations they had instigated the violence of the previous day. However, their supporters rejected the plan, and a group of fishermen reportedly came onto the stage and hustled them onto their boats and to safety at an undisclosed location.

On Wednesday, protest continued around the region, including more arrests in Chennai. Demonstrators in Idinthakarai, prevented from approaching the plant by land, announced they would take to the sea Thursday for a daylong protest.

On Thursday, September 13, the Supreme Court rejected a last-minute petition to stop the loading of nuclear fuel because court-mandated safety precautions had still not been met. Undeterred by the last-minute legal defeat, Rev. Jesuraj led about 1,500 people from Our Lady of Lourdes church down to the ocean, where they stood in the water facing the reactors for the entire day, calling the action the “Jal Satyagraha.” PMANE reiterated their four demands: stop loading nuclear fuel; stop plans to arrest anti-nuclear leaders; fairly compensate those who have suffered losses due to the plant; and release those still in custody, who number about 80, including several women.

Reacting to the Jal Satyagraha, police increased boat patrols along the coast. An airplane brought in for surveillance repeatedly passed very low over demonstrators. A Mr. Sahayam from Idinthakarai was startled from his protest on a bridge and fell to his death.

As evening came, the tragedies of the week had only served to fortify the determination of the Kudankalum resisters. With their leaders in hiding, the protesters vowed to resume their “Jal Satyagraha” the next day, continuing their struggle to prevent the operation of the reactor, which could begin as early as two months after fuel is loaded.

Jack Cohen-Joppa and his wife Felice have edited and published the Nuclear Resister newsletter since 1980, chronicling anti-nuclear and anti-war arrests while encouraging support for the imprisoned activists. Their blog also includes an up-to-date list of peace prisoners and their prison addresses.